In his first interview as Speedcast CEO, Joe Spytek speaks with SpaceNews about exiting Chapter 11 bankruptcy and the company’s next steps.
SpaceNews 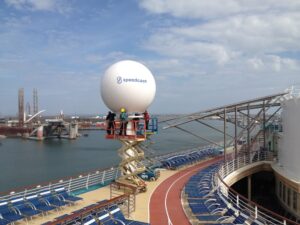 Speedcast is emerging from bankruptcy into a very different satellite communications market.

Bankruptcies, acquisitions and an ongoing pandemic are continuing to reshape an industry in the midst of major technological and financial disruption.

But while COVID-19 disproportionally drags on verticals such as energy, maritime and aero — helping push satcom players like Speedcast, Intelsat and Global Eagle Entertainment into restructuring — it is also accelerating digitalization trends that promise new opportunities for connectivity providers that can ride out the storm.

Speedcast buys its satellite capacity from operators around the world to connect cruise lines, oil rigs and other remote customer platforms. It became the largest company of its kind after ballooning in size by consolidating the fragmented services market.

However, weighed down by the demands of being a public company, it proved to have bitten off too much to chew when its markets faltered. It filed for Chapter 11 bankruptcy protection in April 2020.

It exited bankruptcy March 11 after private equity firm Centerbridge Partners, one of its largest creditors, came to the rescue in a deal that wipes out all $700 million of Speedcast’s debt.

Meanwhile, the broader industry has been jostling for position as COVID-19 vaccines bring fresh optimism. This year has already seen Viasat buy RigNet and Marlink acquire ITC Global in the satcoms arena.

Joe Spytek, who founded ITC Global, was made CEO of Speedcast in January to navigate these changing seas.

SpaceNews spoke with Spytek about the sector’s stress factors, and how the company will use its clean balance sheet, in his first media interview since becoming CEO.

How could the satcoms industry shake out as other restructured companies come back on the scene this year?

Obviously, if you go through a bankruptcy, there’s a reason why and inevitably you’re likely going to do some things different when you emerge. We’ve certainly seen examples of bankruptcies just about cramming down some of the debt. We didn’t take the process lightly and we haven’t shied away from addressing some of the key reasons that pushed us into recapitalization in the first place. Ultimately, the direction of any restructured company is going to be shaped by their new ownership structure. We’re in a good place in that regard.

On the operator side, you’d think that the business models would change. Once the C-band money starts to flow into the coffers of the operators we’ll see if their strategy is more of a buy versus build, or if it’s a straight build. There will inevitably be some modified business models and we’ll see a mix of horizontal integration and vertical integration. They’re starting to test the waters, with Intelsat buying a portion of Gogo’s business.

The whole industry is reevaluating their models, not just those that went bankrupt. It’s all being done with the backdrop of ‘Space 2.0’ and the arrival of SpaceX’s Starlink and Amazon’s Kuiper constellations. To them, money is no object, so it’s going to be interesting to see how our industry reacts to that future.

There’s also the accelerating shift toward digitalization in that backdrop — how do you see that?

This pandemic has accelerated trends that were either in progress or had been talked about for a long time. In the energy sector, we heard about the concept of the ‘digital rig’ for years, but most companies never fully embraced it.

Normally, after there is severe disruption like this, or a severe downturn, companies just go back to their normal operating cadence. This time, because it was combined with the pandemic, it’s changed the way these companies are viewing how they operate. They are doubling down on looking at what they can do remotely and where they can really make a bottom line impact with their connectivity and technology, which is fundamental to their business. Now we’re meeting with customers and the conversation is moving to how we make technology their enabler, not their bottleneck.

The pendulum is swinging, because they want to build as many efficiencies in their operations as possible so when they emerge from the downturn they’re a more efficient organization. They don’t have to increase their head count back to where it was before. We’re seeing that across a number of our verticals.

In energy this is standard fare and we’ve weathered downturns with those customers before and helped them navigate through them. But in the cruise vertical, they’ve never had a downturn and over the last year we’ve seen them have to cut their workforce significantly. I would say the pendulum is now swinging back the other way, and if we can take over some of these onboard services that they did in-house before the pandemic, it’s good for them and it’s good for us.

What about your other verticals?

It’s a little different and nuanced across them. I would say the government vertical has held up pretty well.

We were a little surprised by how hard COVID hit our enterprise vertical, we thought it would be a bit of the opposite. We thought if you’re a big mining operation, or in remote construction mining, it would be similar to the other verticals, but we’ve actually had a little more of a hit there than expected.

So how are you adapting to this new digital environment?

We’re utilizing some of the best elements of SD-WAN to drive improved scalability and adaptability. It’s about leveraging the coming proliferation of new constellations, and hopefully antenna technologies that will allow us to access multiple technologies in orbit from a given footprint.

It’s this concept of really future-proofing what we do and leveraging the trusted partner relationship we have with a large subset of customers. We’re removing the burden of the decision process and engineering that they need to consider with everything that’s coming in the world of space.

In the past, Speedcast didn’t always deliver significant value on the end of the circuit across all our markets. One of the important parts of that value add going forward is going to be taking the onus off the customer for all of that. We’ll be the ones that determine which flat panel antennas are the right ones to use and which ones can access multiple constellations. Binding it all together so that it’s managed and agnostic to the customer, we basically take away the technology risk that they’re so fearful of right now.

As well as in technology, of course there’s the financial disruption coming into space as SPACs propel more companies to the public markets.

When COVID first hit, everyone thought it was going to be a negative for the industry. I’m going to be bold and say that in some ways, it’s actually been positive and I think it’s accelerated things. Space 2.0 really has taken on a life of its own.

I’m very happy to be in the private equity realm because it gives you the ability to maneuver. My job with Speedcast now is to finish the job that previous management started. You have all of these businesses and networks that frankly were never really fully integrated. It’s a big effort.

That’s why it didn’t happen, because as a public company Speedcast had to keep making these numbers every quarter. You get stuck in this vicious cycle of having to do another deal almost to keep the whole thing going, because you never really completed the integration of the previous deal. I’m very comfortable with private equity ownership; it’s a very good place for businesses, at least in the integration space.

Does that mean Speedcast will not play an active role in the private equity roll-ups we’re seeing?

If there’s any M&A to be had, I would think it would be at the edges of the network. It’s important for us not to be caught in a commodity cycle. I don’t want to be stuck in a race to the bottom. The idea is not to be the roll-up machine that Speedcast was in the past. The new Speedcast will be much more focused on profitable revenue and really becoming indispensable to our customer set.

Which markets excite you the most?

Truth be told, the deepest and widest moat we have is around our energy business where we have built a strong relationship with our customers. We’re lucky most of our customers have given us a chance and stuck with us through this process. Frankly, that is partly because unless you really screw up, it’s hard to dislodge. One thing we know how to do is serve our customers well and we’re going to continue to do that, and work to do it even better. We will dig that moat deeper and we’ll dig it wider. I think we will win that space even if the markets are going horizontal — even if they’re not growing dramatically, we’ll continue to win business.

I’m also a big believer in the cruise, ferry, and yacht markets where we’ve got a tremendous hold and market penetration. We have seen extraordinary growth in our yacht portfolio. The very few folks that can afford to do this are living on their yachts and working from them remotely over our network. And we happen to have a pretty empty cruise network right now so we’re able to give hundreds of megabits to a yacht that previously could only get a little bit. That’s been a really interesting pocket of growth.

You don’t often hear about that.

They’re not advertising it. Many of these customers are literally living on their yachts through the pandemic.

In cruise, the ship order book was about $70 billion at the end of last year. That order book is still there. They’ve scuttled old ships — I think Carnival has gotten rid of 18 ships, but they still have 80 more, and they’re going to fill them with paying customers who will all want an incredible wealth of connectivity.

We’ve really partnered with our cruise customers and tried to be as creative and flexible as possible through the last year to work with them. I think we will be tighter with the cruise industry than we ever were after this pandemic. Not the other way around. The ferry business is also a great market for us. We’re taking what we’ve learned in cruise and yachts to ferries.

I should also say, I’m pretty excited about our government business, which will be a U.S.-owned business under our new ownership. Foreign-owned companies operate behind proxy boards and that can add layers and complexity.

I think there are going to be some other really interesting upsides for the business as well, especially when coupled with some U.S. space assets — SpaceX and Amazon, etc.

Sure, but we’ll be very selective. We’ll test before we jump. I actually think you’ll see us exiting more markets than entering. Really, the focus will be on deepening our penetration into existing markets, and where the pockets of value and profit lie.

This article originally appeared in the Mar. 15, 2021 issue of SpaceNews magazine.