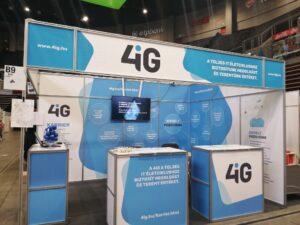 Three Hungarian companies are forming a joint venture to launch the country’s first geostationary communications satellite in 2024. IT and communications company 4iG, TV and radio broadcast company Antenna Hungária, and international relations specialist New Space Industries, plan to use an orbital slot Hungary is leasing to a foreign satellite operator. That lease expires in 2024, creating an opportunity for them to use the slot. Hungary’s national commissioner for space endorsed the program, saying she was “pleased that Hungary has embarked on a development path along which such a serious space investment and service can begin.” The joint venture, CarpathiaSat Hungarian Space Telecommunications Corporation, will be majority owned by 4iG (51%), with Antenna Hungária holding 44% of the venture and New Space Industries having a 5% stake. [4iG]

Intelsat is seeking to acquire a company that it believes will offset declines in satellite broadcast revenues, but has asked its bankruptcy court to keep the identity of the company confidential. Intelsat said it gave the unnamed company a non-binding indication of interest July 2, and entered a two-week exclusivity period Aug. 16 that bars it from negotiating competing offers. Intelsat is asking its bankruptcy court for permission to proceed with the transaction, the value of which was redacted. [Intelsat]

German space company OHB Group has signed a contract with Rocket Lab for an early 2021 Electron launch of a small communications satellite. OHB’s launch services arm, OHB Cosmos, arranged the launch for an unnamed customer. OHB Group divisions in Sweden, Germany and the Czech Republic are responsible for building the satellite. The launch will be among the first in what Rocket Lab expects to be a busy year with launches occurring every two weeks between the company’s New Zealand and Virginia launch sites. [Rocket Lab]

Satellite antenna company Kymeta has raised $85.2 million in a round led by Bill Gates. The company said Tuesday the funding will allow it to complete development of its second-generation flat-panel antenna, the u8, ahead of a release late this year. Kymeta has raised $282.2 million to date in four funding rounds that the company has disclosed. Kymeta said that Gates, who invested $78.5 million in this latest round, has been a “consistent supporter” of the company. [SpaceNews]

North Carolina education officials want to spend $1 million on Starlink broadband satellite services, even though it’s unclear the service will be available there in the near future. The State Board of Education’s chairman told lawmakers Tuesday the $1 million would provide 1,000 hot spots for broadband services for students in parts of the state without terrestrial broadband services, allowing them to take classes from home during the pandemic. While officials said the service would be available in October, Starlink is currently preparing for a beta test of the service that would only serve the northern U.S. and southern Canada. [WRAL-TV Raleigh, N.C.]

Three companies are joining forces to develop an experimental maritime communications cubesat that could be the basis for a future constellation.Satellite operator Orbcomm, smallsat builder AAC Clyde Space and Swedish aerospace contractor Saab said they’ll cooperate on a three-unit cubesat to test a very-high-frequency data exchange system, or VDES, payload for two-way communications between ships and land. VDES offers 32 times the bandwidth of Automatic Identification System transmitters, but currently its use is limited to terrestrial stations that cover only shorelines. If the demonstration cubesat is successful, the companies will consider a constellation of as many as 100 satellites to extend coverage across oceans. [SpaceNews]

Russia is planning an Angara rocket launch in November and may launch three Angara rockets in 2021. The November launch will take place from Russia’s Plesetsk Cosmodrome, where a heavy-lift Angara 5 will carry a mock satellite. The 2021 missions include a light-lift Angara 1.2 launch and up to two heavy-lift Angara 5 missions. Neither vehicle has flown since 2014. Angara 5 is Russia’s replacement for Proton, while the Angara 1.2 is a smaller vehicle that can carry 1,800 kilograms to a 600-kilometer low Earth orbit, similar to Europe’s Vega. [TASS]

Japanese startup Warpspace has raised $3 million as it prepares to build and launch an inter-satellite relay network. Japanese bank Mitsubishi UFJ Capital Co. participated in the startup’s latest round, the size of which was not disclosed. Japan’s Ministry of Economy, Trade and Industry also provided a supporting subsidy for the startup. Warpspace plans to start launching a network of laser-linked satellites in 2022 that can fast track data to the ground for other low Earth orbit companies, such as remote-sensing satellite operators. [Warpspace]