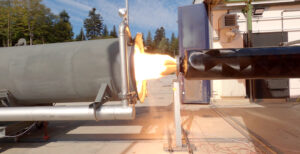 Headquartered in Neuenstadt am Kocher, Germany, HyImpulse is developing its three-stage SL1 launch vehicle designed to carry payloads of up to 500 kilogram to Sun-synchronous orbit. The light-lift launch vehicle will be powered by twelve 16,800-pounds-force hybrid rocket motors — eight on its first stage, and four on its second stage — plus four smaller but otherwise identical engines powering its third stage.

The HyImpulse-developed hybrid rocket motor is powered by a paraffin-based fuel and liquid oxygen. The motor is designed to make use of simpler hardware than a liquid-fueled system while offering greater safety than strictly solid-fueled motors.

HyImpulse said that the Sept. 15 hot-fire test, its first, confirmed that the paraffin/LOX hybrid rocket engine performed on par with liquid hydrocarbon-based fuels. This performance was achieved utilizing a simpler propulsion system than liquid-fueled rocket engines — which lends itself to reliability — at a fraction of the cost.

In addition to the hot-pop fire test being an important milestone on the company’s road to the launchpad, it was also an important step in HyImpulse’s bid to win a DLR-led competition for small launch funding.

The European Space Agency announced July 15 HyImpulse along with Isar Aerospace and the OHB-backed Rocket Factory Augsburg had been selected to compete for small launch funding. Each company received 500,000 euros to further develop their vehicles aiming for two test launches between 2022 and 2023.

In the run up to the 2021 award, HyImpulse will look to utilize a single 16,800-pounds-force hybrid rocket motor to power a sounding rocket launched from the Esrange Space Center in Sweden in March. The company then expects to launch the maiden SL1 flight in 2022.

HyImpulse is a DLR spinoff founded in 2018 out of the chemical propulsion center of the German space agency’s Lampoldshausen facility. It is funded by Rudolf Schwarz, chairman of German technology company IABG, and has a 2.5 million-euro grant from the European Commission to advance its launcher technology. The company aims to offer frequent, reliable and low-cost access to space.