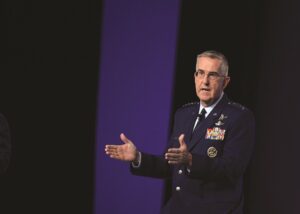 WASHINGTON — Congress gave the U.S. Space Force a lot of elbow room to decide how it wants to organize itself as a new military branch. But if Space Force leaders take too long to deliver concrete plans, Congress will step in and do it for them, the vice chairman of the Joint Chiefs of Staff Gen. John Hyten said.

Hyten, the U.S. military’s second highest-ranking officer, spent most of his career in space operations and strongly advocated for the establishment of a Space Force as a separate military service.

Speaking Sept. 21 on a live virtual forum hosted by the Defense Innovation Unit, Hyten said these are “exciting times” in the space business due to the standup of the Space Force and U.S. Space Command.

The Space Force is going through that right now, “and that’s exciting and that’s the right thing,” he said. “But the other thing I point out all the time is that there’s a finite period of time … Congress is an impatient body.”

Congress and the president “expect it to be done quickly and expect all those answers to be on the table, and if they’re not, what does Congress do? They’ll write it for us.”

Hyten suggested that the Space Force has to “work effectively with the Congress to make sure they answer all those questions. If they do, that’s the best way to go fast because how many times are you given the opportunity to define your own future?”

Hyten did not mention specific areas where the Space Force may have taken too long to make decisions.

Space Force leaders recently experienced a case of Congress stepping in on the issue of officer and enlisted troop ranks and insignia. An amendment in the House version of the 2021 National Defense Authorization Act requires the Space Force to use the Navy’s rank structure. The amendment — put forth by Rep. Dan Crenshaw (R-Texas) — will be debated later this year in a House and Senate conference.

Before the House passed the so-called “Starfleet” amendment, Space Force officials had been internally debating a new rank structure to set the space branch apart from its parent service the U.S. Air Force.

There is also proposed language in the NDAA that would direct the Space Force to establish a reserve component and would prevent the transfer of Army and Navy units to the Space Force.