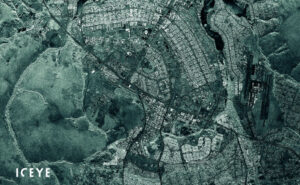 “We’re grateful to have closed a great round,” Mark Matossian, Iceye US CEO, told SpaceNews. “Now, we can stand on the accelerator.”

With the Series C round completed, Iceye is preparing to launch four small synthetic aperture radar (SAR) satellites in 2020 and “at least eight” in 2021, Matossian said.

In addition, Iceye US has begun looking for a U.S. manufacturing site. In February, Iceye opened a U.S. office in the San Francisco Bay Area led by Matossian, who managed a series of aerospace programs at Google including the Earth-imaging venture Terra Bella. A

Iceye currently operates a constellation of three 100-kilogram SAR satellites manufactured in Europe. In addition, the company founded in 2014 manages a dedicated mission for an unnamed customer.

“Iceye is growing tremendously and we love their end-to-end approach,” Adam Niewiński, OTB Ventures co-founder and managing partner, told SpaceNews. “They are building the core bus and developing the software and the infrastructure to manage the satellites.”

In addition, OTB Ventures is impressed with the talent Iceye is attracting.

Iceye “gets thousands of CVs,” Niewiński said. “People prefer to join Iceye rather than traditional government institutions, which used to be the major innovation hubs for space technology.”

That talent is helping Iceye develop third and fourth generation satellites in addition to improving the performance of spacecraft currently flying.

To date, Iceye has operated its satellites “under conservative operating rules,” Matossian said. Now that Iceye has a deep understanding of the satellites and their capabilities, the firm is beginning to collect imagery more frequently during each orbit, he added.

Prior to the announcement OTB Ventures backed Iceye and SpaceKnow, a New York firm that specializes in employing artificial intelligence to draw insights from Earth-observation imagery.

OTB Ventures is establishing a new space fund because “on the one hand, space technology is an area we understand and on the other hand we see great momentum for the space industry,” Niewiński said. “We see the industry moving from a phase of experimentation to earning money in a real commercialization phase.”