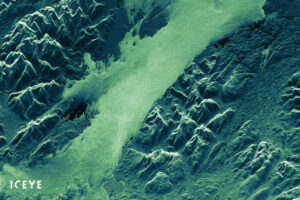 “All three spacecraft have successfully completed initial operations and are now progressing through the calibration process,” Iceye said in a Feb. 25 news release. Iceye customers will gain access to imagery from the new satellites once the company finishes calibrating them, a process that typically takes a couple months.

Iceye began capturing SAR imagery and data with the new satellites Feb. 15, less than one month after they travelled to orbit on the Jan. 22 SpaceX Falcon 9 Transporter-1 flight.

“Seeing the first images from new spacecraft is always an exciting time,” Rafal Modrzewski, Iceye CEO and co-founder, said in a statement. “Each of the frames represents a massive amount of effort from our world-leading team.”

The new satellites are upgraded versions of the small spacecraft Iceye has been launching since 2018.

“On the hardware side we have made various improvements such as those on propulsion and energy generation,” Iceye US CEO Jerry Welsh said by email. “Satellite software development continues on an on-going basis between launches. We apply these enhancements to new spacecraft as well as those already in-orbit to improve image quality and provide new imaging modes.”

Iceye now operates a commercial constellation of six SAR satellites. The company plans to launch at least eight additional satellites in 2021. Some of the new satellites are expected to be built in the United States, where Iceye is establishing a manufacturing facility.