During a call with members of the military on his last Thanksgiving as commander in chief, President Trump touted his efforts to establish the Space Force,
SpaceNews 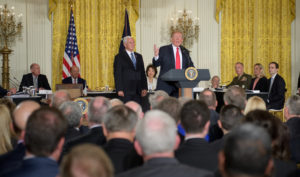 WASHINGTON — During a video teleconference with members of the military on his last Thanksgiving as commander in chief, President Trump touted his efforts to establish the Space Force, calling the newest branch of the armed services “a very important thing to me.”

The Space Force officer on the call was Lt. Col. Matthew Lohmeier, commander of the 11th Space Warning Squadron at Buckley Air Force Base, Colorado.

“You keep watch around the world to detect missile launches, space launches, and nuclear detonations while providing critical intelligence. All of you are pioneers in the newest branch of our armed forces,” Trump told Lohmeier, according to a transcript of the call released by the White House.

Trump thanked all the officers for their service. He was especially eager to talk about the Space Force and his personal involvement in getting the service enacted as a separate branch of the military.

“Nobody thought that could happen,” Trump said. “It’s very special to me, that new branch, because that was something that I felt was necessary.”

Trump once again repeated his claim that it was him who came up with the concept of an independent space service. “Nobody even thought about Space Force,” he said. “And I looked at it, and I said ‘We’re going to have to do something’ because I looked at what China was doing and Russia was doing and others are thinking about doing.”

The idea of a separate military branch for space, however, had been championed by members of Congress before Trump became president. It grew out of a bipartisan push from the House Armed Services Committee going back to 2016, when then-chairman and ranking member of the HASC strategic forces subcommittee Rep. Mike Rogers (R-Ala.) and Rep. Jim Cooper (D-Tenn.) started advocating for a separate space branch.

Rogers and Cooper wrote language to establish a Space Corps under the Department of the Air Force. The provision was passed by the House in the 2018 National Defense Authorization Act but was defeated in the House-Senate conference.

The only difference between the Space Corps of 2017 and the Space Force of 2019 is “just one word,” Cooper told reporters last December just days before Congress passed the 2020 National Defense Authorization Act that established the U.S. Space Force.

“I want to thank you personally for your advocacy for an independent Space Force … We’re very grateful for that,” Lohmeier, the commander of the 11th Space Warning Squadron, told Trump. “We’re making great progress that I don’t think we were able to necessarily make while we belonged to the Air Force.”

“The Air Force has maintained what we will call the traditional mind of space and is responsible for current military space culture,”  Lohmeier wrote in a 34-page paper published in September by the Air Force’s university the Air Command and Staff College.

“Like the waning moon, the traditional mind of space is diminishing in vigor, power, and influence,” he wrote.