The administration is requesting that funding lines in the Space Force’s budget request be transferred from the Air Force’s budget to separate accounts.
SpaceNews 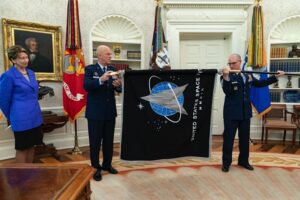 WASHINGTON — The Trump administration and congressional leaders have tentatively agreed to use a stopgap funding measure to keep the government open past Sept. 30 when current appropriations are due to expire. A continuing resolution, or CR, would fund the government at 2020 levels until Congress passes a full appropriation bill for fiscal year 2021.

In a request sent this week to Capitol Hill, the White House included a list of items known as “anomalies” that it wants Congress to address in the CR. One of the anomalies is the funding for the U.S. Space Force.

The administration is requesting that four major funding lines be transferred from the Air Force’s budget to separate Space Force accounts.

If 2020 funding levels are extended without granting these anomalies, funding for Space Force programs will remain under the Air Force accounts.

“Without this anomaly, most Space Force activities during the period of the CR would be required to be funded from the Air Force accounts, requiring manual adjustments of the obligations and disbursements,” says the White House request. “This administrative burden would adversely impact Space Force’s mission execution as staff would devote more time to duplicative administrative work.”

The White House also is asking Congress to allow the Space Force to initiate new procurement programs under the CR. Under CR funding federal agencies are not allowed to start new acquisitions unless Congress grants an anomaly.

The Space Force would still be able to operate and move forward with existing programs without an anomaly. A military budget expert said an anomaly would help avoid the accounting headaches of switching accounts mid-year or whenever a final appropriation bill is passed.

Lawmakers in the coming weeks have to negotiate the terms and the length of the stopgap funding measure. The White House request indicates it expects the CR to extend until mid-December.