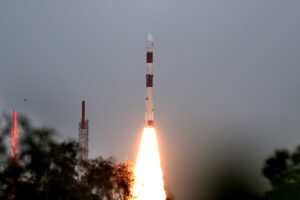 Polar Satellite Launch Vehicle-C49 (PSLV-C49) lifted off from the Satish Dhawan Space Center on the Indian island of Sriharikota at 4:42 a.m. Eastern Nov. 7 after a short weather delay. The PSLV-DL variant used for the mission includes two side boosters.

The launch was scheduled for late 2019 but became ISRO’s first launch of 2020 due in part to the COVID-19 pandemic.

The EOS-01 Earth observation satellite was successfully injected into a 575-kilometer circular orbit around 16 minutes later.

The roughly 628-kilogram EOS-01 is a synthetic aperture radar satellite with all-weather and day-and-night observation capability. It is part of ISRO’s RISAT series of SAR satellites and originally named RISAT-2BR2 but was changed to EOS-1 as per new naming criteria.

EOS-1 is intended for applications in forestry, agriculture and disaster management, according to ISRO.

ISRO announced that all payloads had been successfully inserted into their intended orbits.

All nine customer satellites successfully separated and injected into their intended orbit#PSLVC49 pic.twitter.com/rrtL3sVAI3

Spire, a company that provides weather, ship-tracking and aircraft-tracking information from space, has previously used the PSLV to get its Lemur satellites into orbit.

Kleos plans to launch and operate up to 20 clusters of satellites to create a constellation to provide monitoring of global events. The company notes the Strait of Hormuz, South China Sea and East and West African coasts as locations of interest.

The Kleos sats were originally intended to launch on a Rocket Lab Electron in a late 2018 flight.

India is preparing to follow up with launch of the GSAT-12R communication satellite into geostationary transfer orbit in December.

ISRO will use the PSLV-XL which features larger strap-on boosters for the mission.