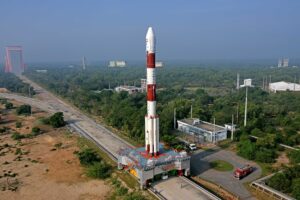 The 44-meter-high Polar Satellite Launch Vehicle-C50 (PSLV-C50) lifted off from the Satish Dhawan Space Center on the Indian island of Sriharikota at 5:11 a.m. Eastern Dec. 17.

Once in geostationary orbit CMS-01 will provide extended C-band frequency communications for the Indian mainland and the Andaman-Nicobar and Lakshadweep islands. CMS-01 is expected to operate for more than seven years from 83 degrees East GEO with two deployable solar arrays providing 1500 W of power generation.

The launch was the 77th from Satish Dhawan Space Center and the 52nd PSLV launch. The launcher was rolled out from the vertical integration facility to the pad Dec. 14 for final launch preparations.

The launch is India’s second of a 2020 severely impacted by the COVID-19 pandemic. Satish Dhawan Space Center returned to action in early November with the launch of the EOS-1 Earth observation satellite and nine smaller payloads.

India’s Gaganyaan human spaceflight project has also suffered from the impacts of the pandemic. K Sivan told Times of India that not only would the crewed launch be delayed from December 2021 to no earlier than 2022, but a lot of work is required to be able to conduct one of two planned uncrewed launches carrying robots in 2021.

Upcoming Indian missions include the Geo Imaging Satellite GISAT-1, which was planned to launch aboard a Geosynchronous Satellite Launch Vehicle (GSLV-F10) in March this year.

Also expected in early 2021 is PSLV-C51. The mission will be special for ISRO and the entire country, K Sivan said post-launch Thursday, as it will carry the first satellite from a startup named Pixxel India. The satellite will be called Anand and be part of the planned Firefly fleet of Earth observation satellites.

Pixxel is said to be India’s first private satellite imaging company. It recently signed a deal with  NewSpace India Limited,  Government of India company under the Department of Space, relating to the launch.

India recently drafted Spacecom Policy which is expected to revolutionize India’s space sector. Earth observation is noted as one of main areas for potential growth.

Space is the space to be in!

I assure you, and several others like you, of the constant support from the Government.

The reform trajectory in this sector will also continue. https://t.co/ZigJpLyDSF