Companies and organizations in the space industry support the recommendations of a recent report that the Commerce Department handle civil space traffic management, but say it’s more important that the government settle on an agency and move forward.
SpaceNews 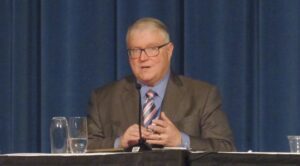 WASHINGTON — Companies and organizations in the space industry support the recommendations of a recent report that the Commerce Department handle civil space traffic management (STM), but say it’s more important that the government settle on an agency and move forward.

A report released Aug. 20 by the National Academy of Public Administration (NAPA) concluded that the Commerce Department’s Office of Space Commerce was best suited to take on civil STM work, ranking ahead of NASA, the Federal Aviation Administration and the Defense Department.

That report was mandated by Congress in the fiscal year 2020 omnibus spending bill. While the White House had assigned STM to the Commerce Department in Space Policy Directive 3 in 2018, some congressional appropriators were skeptical the department was capable of handling that work, and requested the NAPA study instead of providing the funding the department sought to start STM activities.

Industry officials said they agreed with the NAPA report’s assessment. “The Department of Commerce has taken a very strong lead in wanting to be involved in space safety and space sustainability,” said Chris Kunstadter, global head of space for insurer AXA XL, during an Aug. 24 panel session at the American Institute of Aeronautics and Astronautics (AIAA) Propulsion and Energy Forum. “They have the relationships within the government and access to the right people and right technologies.”

However, he said the choice of the Commerce Department to handle civil STM was less important than the government making a final decision on an agency to handle those responsibilities and receive the necessary funding to carry them out. “In the end, it doesn’t really matter who does it, just that it gets done,” he said.

Other panelists agreed. “Quite honestly, as an owner-operator, we’re ambivalent, as long as it’s being done,” said Walt Everetts, vice president of space operations and engineering at Iridium. He credited Secretary of Commerce Wilbur Ross for showing interest in his department taking on that responsibility. “I think it’s a fine choice, but I think we’ve probably debated it too long.”

Tim Maclay, chief executive of consulting company Celestial Insight and former director of mission systems engineering at OneWeb, said a bigger issue was exactly how space traffic management is defined, and if the scope of that work goes beyond simply notifying operators of potential collisions to a more regulatory role. “Who actually does it, I think, is less important as long as we start making some progress in doing it,” he said.

“The most important thing is that there is a decision,” said Clare Martin, executive vice president of operations and programs at Astroscale U.S., a company developing technologies to deorbit satellites and other debris.

The NAPA report’s conclusions also have the support of an industry group. In an Aug. 24 statement, the Commercial Spaceflight Federation endorsed the report’s findings, including recommendations that the Commerce Department work with other agencies and the private sector on STM. “We are pleased to see NAPA’s detailed and thoughtful analysis on the need for a coordinated effort” on STM, said Eric Stallmer, president of the organization, in that statement.

The Commerce Department continued planning for space traffic management while the NAPA study was in progress. “We’ve had a good amount of time to, as the secretary would say, sharpen our pencils on issues,” said Kevin O’Connell, director of the Office of Space Commerce, in an Aug. 24 podcast by AIAA, Mitre Corporation and the U.S. Chamber of Commerce.

That work, he said, included planning for an “open architecture data repository” that Commerce seeks to develop to host space situational awareness data from government and commercial sources, as well as related policy and regulatory issues. “It did give us a lot of time to work through a whole host of issues that we know we’re going to have to deal with.”

The NAPA report is not the final word on which agency will take on civil STM work and with how many resources. Commerce Department officials, speaking on background last week, said they hoped that the report will convince congressional appropriators to provide the department with the funding needed to carry out that mission. The department requested $15 million for the Office of Space Commerce in its fiscal year 2021 budget proposal, with most of that funding going to STM.

Darren McKnight, technical director of Centauri Corporation and the moderator of the AIAA conference panel, noted that need for Congress to act. “You’re very optimistic when you say there was a decision,” he said after a panelist endorsed the findings of the NAPA report. “Clearly, Congress still needs to agree with that.”