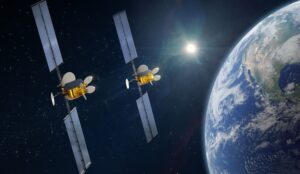 The companies announced Jan. 8 the order of two spacecraft from Airbus’ OneSat family of fully reconfigurable geostationary satellites. The companies did not disclose the terms of the deal beyond starting the satellites will be delivered in 2023.

Intelsat did not state where the two satellites will be located in GEO or even what spectrum it will use, other than they will operate in “multiple frequency bands.” The company said the satellites will be part of its effort to develop a new network that both offers more capacity and can be reconfigured to meet changing market demands.

“Intelsat’s next-generation software-defined network will be the catalyst for our growth, enabling future Gogo Commercial Aviation inflight broadband services, as well as other managed services across Intelsat’s customer segments,” Stephen Spengler, chief executive of Intelsat, in a statement about the satellite order. Intelsat acquired Gogo Commercial Aviation in September for $400 million.

In a Dec. 31 filing in a federal bankruptcy court overseeing Intelsat’s Chapter 11 case, Intelsat sought court permission to order the satellites. The two satellites, called “SD Satellites” in the filing, will be used to serve the continental United States, the North Atlantic region, and elsewhere in the Western Hemisphere, the company said. The satellites were part of “a broader capital expenditure plan within the Debtors’ go-forward business plan” shared with creditors in October.

“This expected customer demand is particularly acute following the Debtors’ acquisition of the Gogo Commercial Aviation business unit, combined with limited available capacity in the aforementioned geographies today,” Intelsat stated in its filing.

The filing redacted the cost of the two satellites, but noted an initial milestone payment was due Jan. 8. The court issued an order authorizing the satellite contract Jan. 7.

The Intelsat deal brings the total number of OneSat satellites ordered to six. Inmarsat ordered three of the spacecraft in May 2019 as part of the expansion of its Global Xpress fleet. Australian operator Optus ordered a OneSat satellite, Optus 11, in July 2020.