Intelsat has signed a satellite contract with Maxar Technologies, placing the final order in a one-time surge in manufacturing deals triggered by the Federal Communications Commission’s upcoming C-band spectrum auction. 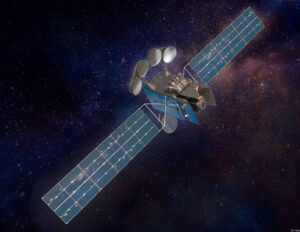 Maxar will build the Intelsat-37 communications satellite at its Palo Alto, California, factory on a 1300-class platform, Intelsat said Sept. 17.

Intelsat-37 is the last of 13 satellites ordered between Intelsat and SES to consolidate North American broadcast customers into a smaller swath of spectrum, freeing up 300 megahertz of C-band airwaves the FCC is repurposing for cellular 5G services across the United States.

Maxar reeled in the most orders in this year’s C-band bonanza, with contracts to build five satellites. Northrop Grumman came in a close second with four satellites while Boeing and Thales Alenia Space will each build two C-band replacements. The anticipated $3.4 billion cost of building and launching these replacement satellites, and deploying their associated ground infrastructure, will ultimately be footed by the 5G network operators that win December’s spectrum auction.

Intelsat and SES are each chasing billions of dollars in incentive payments to clear the spectrum by December 2023, and signed manufacturing and launch deals this year to get new capacity in orbit ahead of that deadline.

Eutelsat intended to order one C-band satellite, but scrapped that plan in favor of repacking customers into spare capacity on its current fleet. Telesat and Claro, the other operators participating in the FCC’s spectrum-clearing program, said they have too little C-band business over North America to warrant replacement satellites.

At 17 orders industrywide, 2020 has already tied the number of orders placed in 2019. With 3.5 months to go, this year’s order haul is in the upper range of the 10 to 20 commercial geostationary satellites that manufacturers expected operators to order in 2020.

The FCC is requiring winning bidders from its December C-band auction to cover the cost of replacement satellites for operators leaving the spectrum. Intelsat and SES told the FCC this summer they each expect to spend around $1.7 billion on manufacturing, launch services and ground infrastructure for their C-band satellites.

The reimbursable nature of those satellites added political pressure for Intelsat and SES to order from U.S. manufacturers, which they did for 11 of the 13 satellites.

Intelsat’s last order occurred as a growing number of satellite operators are urging the FCC to stipulate that the reimbursable satellites only carry C-band payloads. SES’s transition plan calls for dedicated C-band satellites, while Intelsat’s includes satellites with payloads in other frequencies.

Eutelsat, Hughes and Inmarsat told the FCC earlier this year that they fear Intelsat will use the auction’s rules to subsidize capacity in other bands, giving it an unfair advantage in their markets. Viasat joined that group Sept. 4, saying that without a rule change, Intelsat “will have access to new and virtually free Ku-band and Ka-band satellite capacity with broad international coverage to unfairly compete in the satellite mobility marketplace.”

Intelsat responded Sept. 16 in a letter to the FCC saying Viasat had presented a “series of error-filled or misleading assertions.”

“Intelsat has committed publicly that it will not seek reimbursement for incremental costs of any non-C-band payloads portion of the replacement satellites … So there will be no improper subsidization,” Intelsat wrote.