An international consortium plans to launch a hyperspectral camera built by South Africa’s Dragonfly Aerospace on a NanoAvionics rideshare mission scheduled to launch in 2021 on a SpaceX Falcon 9 rocket.
SpaceNews 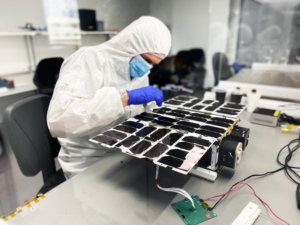 SAN FRANCISCO – An international consortium plans to launch a hyperspectral camera built by South Africa’s Dragonfly Aerospace on a NanoAvionics rideshare mission scheduled to launch on a SpaceX Falcon 9 rocket in 2021.

The mission, called HyperActive, is designed to demonstrate the performance of Dragonfly’s miniature hyperspectral imager plus a high-gain X-band antenna and upgraded X-band downlink transmitter from CubeCom of South Africa. A secondary goal of the HyperActive mission is to gauge commercial market demand for hyperspectral data processed and distributed globally by Space JLTZ of Mexico.

Brent Abbott, NanoAvionics US CEO, told SpaceNew he was eager to fly Dragonfly’s half-kilogram Mantis imager once he learned of its unique features. Through software, Mantis can obtain imagery with various combinations of 148 spectral bands.

“Nowadays, data is the most powerful tool companies can have,” Terreros Corrales said. “By using new technology to generate and analyze this data, it can then be used to develop innovative solutions and optimize various industries such as agriculture, mining and livestock” and detection of changes in vegetation, pollution and vehicle traffic.

“This program shows how important international collaboration can be to the NewSpace sector,” Abbott said.

Dragonfly, founded in early 2020 by former employees of South Africa’s SCS Space, has developed multispectral and hyperspectral cameras of various sizes. Earth Observing System Data Analytics plans to install a Dragonfly multispectral imager on a satellite scheduled for launch in 2022.

“Hyperspectral use cases are still developing,” said Bryan Dean, Dragonfly Aerospace CEO. “We are finding great application in the industrial sector in machine vision. We are looking to apply that technology to the space domain.”