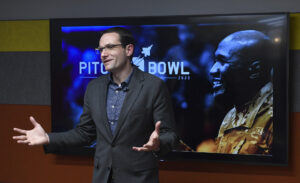 During the conference, 10 companies participating in the first International Space Pitch Day (ISPD) won awards of 53,000 British pounds apiece ($70,167), plus the opportunity to compete for follow-on contracts from U.S. and U.K military agencies.

“Pitch Days open the government’s aperture to work with commercially-focused companies,” Will Roper, U.S. Air Force assistant secretary for acquisition, technology and logistics, said in a statement. “Competing for technology outside of our fence lines has been a major U.S. Air Force and Space Force theme. Partnering with our allies to compete globally is the natural evolution.”

“Congratulations to the winners and all those that took part in the first International Space Pitch Day – it has captured the imagination of innovators and militaries not just across the U.K. and U.S., but all over the world,” Air Vice Marshal Harvey Smyth, Director Space in the U.K. Ministry of Defence, said in a statement. “We look forward to building on [ISPD’s] success as we seek to fast-track innovation and cutting-edge technology to the front line quicker than ever before with fresh ways of working with industry to make sure we stay ahead of our shared adversaries and the threats they pose.”

People in the United States and United Kingdom who worked behind the scenes to plan ISPD and shepherd companies through the Shark-Tank-style competition overcame multiple obstacles and ultimately achieved several firsts.

For example, ISPD was “the first time two nations have awarded joint defence innovation contracts to an overseas-based enterprise in this way,” according to a Nov. 17 ISPD news release.

It was also “the first time same-day contracts have been awarded in this way to industry by the UK Ministry of Defence,” the news release added.

ISPD coordinators described some of the challenges during a Nov. 18 panel discussion.

“Since we were doing contracts in a nontraditional way, we had to do some contracting jiu jitsu to pull it off,” said U.S. Air Force Capt. Michael Telcide, space partnership program manager at the Space and Missile Systems Center.

In addition, the timeline for the program was compressed to align ISPD with Defence Space 2020, a conference originally designed to bring people together in London, but moved online due to the COVID-19 pandemic.

“Our schedule and our planning were extremely restricted but thanks to everyone’s hard work we did manage to deliver on time,” said Rachel Solomons, Defence and Security Accelerator delivery manager.

Similar competitions are likely to be held in the future although the details have not been worked out. It is possible, for example, that additional nations would join the United States and United Kingdom in holding future pitch competitions. Many of those decisions are likely to be resolved in the coming weeks, said Van Espahbodi, Starburst Accelerator managing partner and cofounder.

Companies that won ISPD awards will have three months to develop a prototype of their technology or software.

“That’s their chance to show us the value of that piece of technology or software,” said Flt. Lt. Mark Platt of the Royal Air Force Space Capability Development team.