An independent investigation of a Vega launch failure in November confirmed that misconnected cables in the rocket’s upper stage doomed the mission and made recommendations to allow a return to flight in early 2021.
SpaceNews 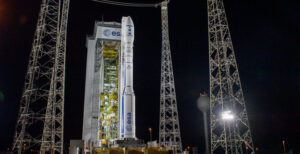 WASHINGTON — An independent investigation of a Vega launch failure in November confirmed that misconnected cables in the rocket’s upper stage doomed the mission and made recommendations to allow a return to flight in early 2021.

The European Space Agency announced Dec. 18 it had completed an investigation, jointly conducted with Arianespace, into the Nov. 16 failure of a Vega launch on a mission designated VV17. An initial investigation by Arianespace, reported less than a day after the launch, concluded two cables used in a thrust vector control system in the rocket’s Avum upper stage were inverted, causing the stage to tumble.

The independent investigation confirmed that technical cause for the failure. At a Dec. 18 news conference, Pierre-Yves Tissier, deputy chief technical officer of Arianespace, said the first three stages of the rocket performed nominally, and that the Avum upper stage separated and ignited its engine as planned 483 seconds after liftoff.

The problem was detected in the “first instant” after ignition, he said, and the stage’s thrust vector control system reached its maximum setting within 10 seconds. The stage started tumbling and, while the engine continued to fire, the stage went onto a ballistic trajectory, reentering over the Arctic.

“The independent inquiry commission concludes that the VV17 cause of failure is not attributable to a flaw in the qualification of the design, but to the wrong routing and connection of the control lanes of electromechanical actuators of the Avum upper stage, resulting in an inversion of steering commands and causing trajectory degradation, leading finally to the loss of the vehicle,” he said.

Investigators blamed the failure on both “misleading” integration procedures that caused the workers to invert the cables, and a failure to detect the problem during inspections between integration and final acceptance of the launch vehicle.

Giulio Ranzo, chief executive of Avio, the prime contractor for Vega, suggested that the problem hadn’t taken place in the past because workers had experience in the procedures and were able to fill in gaps in the documentation. “Perhaps in the past we had people who, with their knowledge of the product and past experience, have covered for some lack of precision in such procedures,” he said. “What we are learning today is that we need to make these procedures even more reliable, independent of who is the operator executing it.”

The pandemic, and its resulting disruptions, may have also played a factor. “The last year in which we worked has been a very peculiar year,” he said. “That said, we cannot justify the failure purely because of that.”

Giovanni Colangelo, ESA inspector general, said the investigation’s conclusions fell into two classes. One is to perform additional inspections and testing of the next two Vega rockets, which are either entirely or mostly completed, to look for any similar flaws. A second set of recommendations involves improving procedures for launch vehicle integration and testing, as well as improved training of workers and inspectors.

Ranzo said Avio accepted the recommendations. The company is setting up three groups to study issues with equipment, stage integration and overall launch vehicle integration to implement them.

None of the parties involved in the investigation discussed the financial impacts of the failure or the cost to implement the recommendations. “The priority number one is now to work on this action plan to restore the full robustness” of the Vega, said Daniel Neuenschwander, ESA’s director of space transportation. “The financial consequences will be assessed in due time.”

Arianespace said it didn’t believe the failure and resulting corrective actions would have a major impact on the Vega program. Prior to the failure, the vehicle’s next launch, VV18, was scheduled for February. Stéphane Israël, chief executive of Arianespace, said the company now expects that launch to take place by the end of March.

The VV18 mission will carry the first Pléiades Neo imaging satellite built by Airbus. “We will scrutinize with Airbus that everything has been done properly in order to go for a reliable return to flight,” he said, with Airbus getting insight into the implementation of the recommendations. “This is the willingness of this very demanding customer.”

Israël declined to identify the customer for the following Vega mission, VV19. “We disclose the missions one after the other,” he said. “We will have an opportunity to disclose the Vega manifest a little later on.”