Isotropic Systems raised $42 million to continue development of broadband terminals for use by a wide range of satellite systems in a round led by satellite operator SES.
SpaceNews 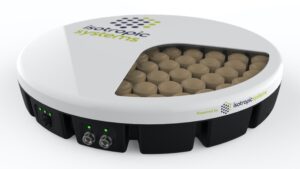 WASHINGTON — Isotropic Systems raised $42 million to continue development of broadband terminals for use by a wide range of satellite systems in a round led by satellite operator SES.

Isotropic announced Feb. 8 the new round, including equity investment as well as grant funding from the British government. Besides SES, other investors include Orbital Ventures as well as existing investors Boeing HorizonX Global Ventures, Space Angels and Firmament Ventures. The company has now raised about $70 million to date.

The company will use the funding to continue development of flat-panel antenna systems capable of working with multiple satellite systems, with the goal of having its first commercial system ready next year. The company is opening a new technology and testing facility near its headquarters in Reading, England, and plans to grow its workforce from 70 to 110 people by the end of the year.

“The funding that we have gets us substantially close to product launch,” John Finney, founder and chief executive of Isotropic, said in an interview. He added the company will likely to another funding round late this year or early next year to provide working capital as it moves into commercial sales.

Finney said he chose to work with strategic investors like SES last year, concerned that venture capital funding for early stage companies would dry up during the pandemic. “They’re a customer of ours, and they have a vested interest in wanting to see the terminals developed,” he said. “They were really excited about the opportunity to invest.”

SES, which has been testing Isotropic’s terminals, sees them as a valuable complement to its O3b and upcoming O3b mPOWER satellite constellations. “Isotropic’s multi-beam antenna plays an important role in our multi-orbit strategy and is a key enabler for advanced satellite services on land, in the air and at sea,” Steve Collar, chief executive of SES, said in a statement. “Our investment reflects the potential that we believe this breakthrough technology has for SES and for the industry as a whole.”

Finney said that the investments by Boeing and SES don’t carry with them any preferred pricing or other restrictions on Isotropic’s ability to work with other companies. “Both companies want to see us thrive, and they made a point not putting in anything that’s restrictive to the company,” he said. “We can sell to anyone.”

Isotropic has been working with SES to demonstrate its terminals, including a test last year with the U.S. Army. “The feedback was incredibly positive,” he said of that test, adding that another test is planned for this year.

Government applications is a primary focus for the company, in part because it is a “huge market,” he said. Isotropic’s terminals can work with both government and commercial satellites without needing separate antennas, and can also support specialized waveforms used by government systems.

Another major market is aeronautical connectivity thanks to an emerging shift to Ka-band, the first frequency band Isotropic’s terminals will support. An ability to integrate those terminals into composite airframes “will be an emerging, big story” in the coming years as manufacturers look for ways to incorporate satellite terminals in ways to minimize drag.

Other potential uses include in rail and high-end maritime services, such as yachts. Finney said use of the terminals in broader maritime applications will come later. “We need to get down the cost curve to enter those markets,” he said. “Those become later markets for us.”

Isotropic originally pursued the consumer satellite broadband market, but shifted away from that to high-end applications. Finney said a major reason for that was because companies like Amazon and SpaceX have decided to develop their own broadband terminals. “For their own reasons they’re vertically integrated, and they believe that that’s the way to drive the cost down of a consumer broadband terminal,” he said.

So far, those efforts have not produced low-cost terminals: SpaceX’s Starlink antenna system costs as much as $2,000 each by some estimates. Finney would not rule out returning to that market in the future. “We have that capability in the wings,” he said. “As they go through learning about how difficult it is to achieve those price points, an opportunity presents itself there.”