The three-person crew of the International Space Station will spend the weekend confined to a single module to help engineers track down the source of a small but persistent air leak there.
SpaceNews 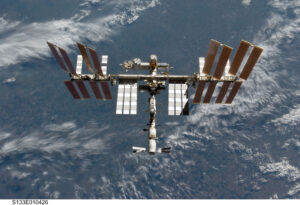 WASHINGTON — The three-person crew of the International Space Station will spend the weekend confined to a single module to help engineers track down the source of a small but persistent air leak there.

NASA announced Aug. 20 that the station’s crew of NASA astronaut Chris Cassidy and Roscosmos cosmonauts Anatoly Ivanishin and Ivan Vagner will stay in the station’s Zvezda module from the evening of Aug. 21 until the morning of Aug. 24. Hatches separating all of the station’s modules from one another will be closed through the weekend.

That effort is intended to identify the source of a small air leak first noticed on the station last September and that has more recently increased. The loss of air took time to characterize, the agency said in a statement, because of other station activities, such as spacewalks and the arrival and departure of spacecraft.

The leak, NASA added, “is still within segment specifications and presents no immediate danger to the crew or the space station.” The agency hopes to have a preliminary indication of which module is the source of the leak in about a week.

This test comes at a quiet time in station activities, with just three people on board. They can be easily accommodated in the Zvezda module, launched in 2000 and equipped with living quarters. A Japanese HTV-9 cargo spacecraft departed the station Aug. 18, with no vehicles scheduled to arrive at the station until early October.

The leak is far less severe than an incident almost two years ago involving a Soyuz spacecraft docked to the station at the time. The hole in the orbital module of the Soyuz MS-09 spacecraft caused an air leak that required an urgent repair by cosmonauts in August 2018. Russian officials never publicly disclosed the cause of the hole, although it’s widely believed to have resulted from damage during pre-launch processing that was inadequately repaired.