Japan and India are preparing for a resumption of launch activities in a year heavily affected by the COVID-19 pandemic.
SpaceNews 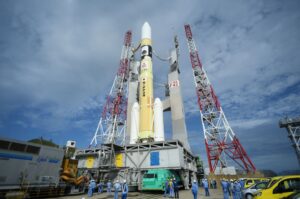 HELSINKI — Japan and India are preparing for a resumption of launch activities in a year heavily affected by the COVID-19 pandemic.

Speaking during a Heads of Agencies panel at the International Astronautical Congress Oct. 12,K. Sivan, chairman of the Indian Space Research Organisation (ISRO) said the Polar Satellite Launch Vehicle C49 (PSLV C49) is being prepared for launch in early November.

The launch from Satish Dhawan Space Center will send the 615-kilogram RISAT-2BR2 radar imaging satellite into a low Earth orbit. Four satellites for radio-frequency-mapping startup Kleos Space and a number of Lemur 2 satellites for Spire Global will also be aboard the flight as part of a rideshare agreement.

India’s first human spaceflight mission for its Gaganyaan project will be “slightly delayed” due to the impacts of COVID-19. ISRO was targeting August 2022 for the launch in order to mark the 75th anniversary of Indian independence.

Japan is also preparing for its first launch since launching the Hope Mars mission for the United Arab Emirates in July.

A JAXA official confirmed that the agency is targeting late November at the earliest for launch of the Japanese Data Relay Satellite-1 (JDRS-1) from the Tanegashima Space Center on a H-IIA launch vehicle.

That schedule has yet to be finalized however as final adjustments are still ongoing within the related organizations. Few details of the satellite are so far available, which is expected to operate in a geosynchronous orbit.

The JDRS satellite has been jointly developed by JAXA and the Government of Japan. JAXA is responsible for the optical data relay function.

Hiroshi Yamakawa, president of the Japan Aerospace Exploration Agency (JAXA), was also one of seven heads of agencies at the plenary session at IAC. Yamakawa outlined a number of exploration missions in development.

“The next step to the moon for JAXA is to launch the Smart Lunar Lander, called SLIM, in 2022.” That mission aims to acquire pinpoint landing capabilities on the lunar surface. JAXA and Toyota are meanwhile continuing research into development of the Manned Pressurized Rover as part of an international project.

Both ISRO and JAXA reiterated their commitment to develop a joint polar lunar mission. The Lunar Polar Exploration Mission aims to send a lander and rover to the lunar south pole around 2024. The main objective will be prospecting for water ice.

JAXA is also working on planetary exploration missions. “We are planning the Martian Moon eXploration, or MMX, which is scheduled to launch in 2024.”

MMX will  bring back the first samples from Mars’ moon Phobos. Yamakawa added that MMX will inherit the main sample return technology from the Hayabusa2 mission. Hayabusa2’s return capsule is scheduled to return to Earth Dec. 6, Yamakawa said, following its return from near-Earth asteroid 162173 Ryugu.