A Japanese company planning a series of lunar lander missions has raised $28 million that will allow it to complete development of its first mission.
SpaceNews 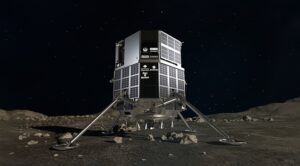 WASHINGTON — A Japanese company planning a series of lunar lander missions has raised $28 million that will allow it to complete development of its first mission.

Tokyo-based ispace announced Aug. 20 it raised the Series B round from a number of investors, led by Incubate Fund, a Japanese venture capital fund that has supported the company since its seed round. Another investor is Space Frontier Fund, a new space-focused venture fund established in May by several Japanese companies, including Toyota.

Two of ispace’s corporate partners also participated in the round. Takasago Thermal Engineering Co. is developing a water electrolysis experiment that will fly on a future ispace lander, while Mitsui Sumitomo Insurance Co. is developing insurance products for commercial lunar projects.

The company has now raised $125 million, including a Series A round in December 2017 now valued at $95 million. That earlier round was the largest Series A round for a Japanese startup and one of the largest for any space startup.

The Series B round gives ispace enough money to complete development of its first Hakuto-R lander. “This Series B round of $28 million will cover the completion of Mission 1 development on schedule in 2022,” said Jumpei Nozaki, chief financial officer of ispace, during an online press conference about the new funding.

That first mission will be followed by a second lander mission in 2023. Both will use a revised design of the Hakuto-R lander that the company announced in July, decreasing the spacecraft’s overall size and mass while maintaining a payload capacity of 30 kilograms.

“For Mission 2 development, we still need to secure money to complete this mission,” Nozaki said. That could come from payload and other sales revenue as well as additional financing.

Those two missions represent the first phase of the company’s business plan, said Takahiro Nakamura, chief operating officer of ispace. A second phase will involve “high-frequency delivery” of payloads to the moon, as well as data acquisition and sales. A third phase will focus on utilizing lunar resources.

Starting with the third mission, ispace plans to increase the size of its lander to accommodate heavier payloads. “We’re investigating the right size of the payload capacity,” said Takeshi Hakamada, founder and chief executive of ispace. He suggested that the payload capacity could increase by 100 to 150 kilograms, depending on the requirements of potential customers.

The company also used the funding announcement to unveil a new business line. The “Blueprint Moon” initiative will collect lunar data and offer data products to government, academic and commercial customers. The company is starting that effort now using data from government lunar missions, to which it will later add images and other data from its own missions.

“We aim to collect a wide variety of data types to provide to customers, and to support overall lunar development,” Nakamura said. “Using this data, we can help customers plan their own lunar missions.”