NASA’s James Webb Space Telescope is making continued progress for a launch in October as engineers close out a series of technical issues with the spacecraft but deal with one new problem.
SpaceNews 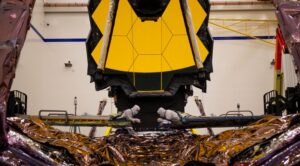 WASHINGTON — NASA’s James Webb Space Telescope is making continued progress for a launch in October as engineers close out a series of technical issues with the spacecraft but deal with one new problem.

In a March 16 presentation during a meeting of NASA’s Astrophysics Advisory Committee, Eric Smith, JWST program scientist, said engineers had either completed work on, or were in the process of wrapping up, several technical issues the program had been tracking in recent months, none of which posed a risk to the mission’s schedule.

Those issues included concerns about residual air pressure in the spacecraft’s sunshield that could stress it when the Ariane 5 rocket that will launch JWST jettisons its payload fairing. Smith said that issue has been closed after adding a couple patches to the sunshield to ensure it could handle double the required pressure differential. Another issue, fasteners on the spacecraft that may not have been installed with sufficient torque, has also been resolved by retorquing those fasteners.

The project has 48 days of schedule margin remaining, which Smith said was in line with projections at this phase of development. “We’re burning it down at the pace expected,” he said of that schedule margin.

JWST is currently going through a final series of deployment tests, including of its primary mirror. The spacecraft will then be prepared for shipment later this summer to Kourou, French Guiana, for final launch preparations.

Smith said the program is dealing with one new technical issue. Two communications transponders suffered separate problems during testing in January. Engineers have tracked down the problems with the two units and started repairs this week. “Those boxes will be back in time for us to make our planned shipping date,” he said.

That issue, he acknowledged, will use some of the remaining schedule margin. “The plan right now is that we’ll get them back in time so that we don’t have to use all of it,” he said. “That’s the main thing that we’re watching regarding the margin.”

One other issue is the name of the spacecraft itself. The telescope is named after James Webb, the NASA administrator for much of the 1960s known for his leadership of the agency during the race to the moon. Earlier in his career, Webb worked at the State Department and reportedly oversaw policies there to purge the department of LGBT employees. Some object to the name for that reason and have called on NASA to rename the telescope.

Smith said both NASA’s chief historian, Brian Odom, and other historians outside the agency have been studying Webb’s activities at the State Department. “They haven’t completed their research in the archives yet, but when they do, that’s when the agency would come out with a position on that,” he said.

While JWST is sticking to its October launch date, the next flagship astrophysics mission, the Nancy Grace Roman Space Telescope, is likely to be delayed because of a slowdown in activity during the pandemic.

“We do have COVID impacts,” said Julie McEnery, senior project scientist for the mission, previously known as the Wide Field Infrared Survey Telescope, or WFIRST. In a presentation at the same meeting March 16, she said the program has been running at “70% efficiency” since the start of the pandemic a year ago, and would likely remain there for several more months as the pandemic slowly ebbs.

“The delay is on the order of months, not years,” she said, adding that the pandemic was the only issue the telescope was facing. “Fundamentally, Roman is on track. Except for the COVID-related impacts, everything is coming together and is where it needs to be.”

Speaking to the committee March 15, Paul Hertz, director of NASA’s astrophysics division, said Roman’s launch date would likely move from late 2025 to the middle of 2026 because of the pandemic. “It will need additional funding to pay for that schedule slip,” he said, but didn’t give an estimate of that increased cost since the agency is still reviewing estimates of the delay and related costs.