NASA’s James Webb Space Telescope remains on schedule for a launch in a little more than a year, but the program is still dealing with some technical issues that could eat into its schedule reserve.
SpaceNews 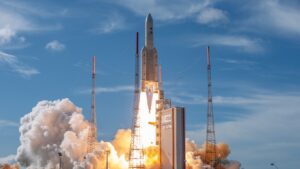 WASHINGTON — NASA’s James Webb Space Telescope remains on schedule for a launch in a little more than a year, but the program is still dealing with some technical issues that could eat into its schedule reserve.

At an Oct. 19 meeting of NASA’s Astrophysics Advisory Committee, Eric Smith, JWST program scientist, said the mission was making good progress after the agency decided in July to delay the launch by seven months, to the end of October 2021. That delay, NASA officials said then, was caused in part by the coronavirus pandemic, which slowed down work on the telescope at a Northrop Grumman facility in Southern California.

Earlier this month, NASA and Northrop completed the final set of environmental tests on JWST, where the integrated spacecraft was subjected to acoustic and vibration conditions like those it will experience during launch. Smith said they are now moving to a final series of deployment tests of key telescope structures, such as its sunshield, which will continue through the spring of 2021. At that point it will be packed for shipment to the launch site in French Guiana.

JWST is still dealing with some technical issues. One ongoing one is a concern that residual air trapped in the folded sunshield could overstress it when the Ariane 5 that launches the spacecraft jettisons the payload fairing. Smith said the program has been working with Arianespace to change air vents in the fairing.

On two Ariane 5 launches with the new vents, sensors measured residual air pressures inside the fairing nearly double the rated capability of the sunshield. “There’s a little more pencil sharpening that has to be done on this issue,” he said.

That work includes work by NASA and Northrop Grumman to see if the spacecraft can tolerate the higher residual pressures measured on the launches. If not, he said some parts of the spacecraft may need to be “patched” to handle the higher pressures, work he said would be completed by December.

“It’s only a few places in the sunshield where it feels the stress above requirements,” he said. Any patching work, he estimated, would require no more than a few days of schedule margin.

A new issue is a concern raised by Northrop from work on another program that some fasteners may not have been installed with sufficient torque. Smith said the JWST team looked at more than 12,300 fasteners and determined that about 160 needed to be retorqued during deployment tests. He said it wasn’t clear what schedule impact, if any, that work would have.