A key senator says she will continue to push for passage during a lame-duck session of a NASA authorization bill that supports the Artemis lunar exploration program, but not necessarily the agency’s goal of return humans to the moon by 2024.
SpaceNews 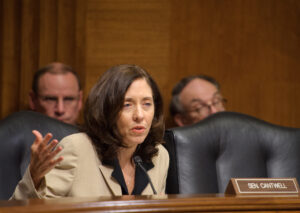 WASHINGTON — A key senator says she will continue to push for passage during a lame-duck session of a NASA authorization bill that supports the Artemis lunar exploration program, but not necessarily the agency’s goal of return humans to the moon by 2024.

In a talk Nov. 6 at a conference organized by the University of Washington’s Space Policy and Research Center (SPARC), Sen. Maria Cantwell (D-Wash.), ranking member of the Senate Commerce Committee, said she remained hopeful that Congress will pass a NASA authorization bill before the end of the year.

“We are trying to pass the NASA Authorization Act of 2019,” she said. Cantwell is one of the co-sponsors of the bill, which the Commerce Committee favorably reported nearly one year ago but has yet to be passed by the full Senate.

Cantwell said she believed that, despite the lack of progress, the bill can still make it through Congress before the end of the year. “I’m hopeful that we will be able to get this authorization bill done. I can’t promise you it’s going to get done in a lame-duck session of Congress, but if it doesn’t, I guarantee you it will be done in the very early part of 2021,” she said.

Cantwell didn’t elaborate on the issues that have blocked passage of the bill, but Capitol Hill sources have said one stumbling block is language in the bill that requires NASA to review the relationships its contractors have with China. Some have objected that the language could affect companies like SpaceX, which has no links to China but is run by Elon Musk, whose electric car company, Tesla, does have business activities there.

That provision is backed by Sen. Cory Gardner (R-Colo.), who pressed NASA Administrator Jim Bridenstine about it during a Senate Commerce Committee hearing Sept. 30. Gardner, however, lost his bid for a second term in the Nov. 3 election.

That provision, though, is just one part of a broader bill that addresses a wide range of NASA programs. “What we’re trying to do is make sure that the NASA priorities are authorized and fully funded,” Cantwell said.

She had reservations, though, about NASA’s schedule for returning humans to the moon by 2024. “While there is a lot of excitement in Congress, there’s not always consensus about when, and what timeframe we should have to meet this Artemis goal,” she said. A 2024 return, she cautioned, “would require enormous amount of resources.”

“I think we’ll get our NASA administrator and others to set an accurate timeframe for what it will really take us to return to the moon,” she said. The bill itself does not explicitly set a 2024 goal for a human return to the moon, instead stating that NASA will “collaborate with commercial and international partners to establish sustainable lunar exploration by 2028.”

The comments are noteworthy as it becomes increasingly likely that former Vice President Joe Biden will be elected president. While the outcome of several states remains undecided, trends in vote returns are in Biden’s favor.

The Biden campaign said little about space policy other than a paragraph in the Democratic Party platform about NASA published in July. “We support NASA’s work to return Americans to the moon and go beyond to Mars, taking the next step in exploring our solar system,” the platform states. It did not, though, endorse the current 2024 goal for that human return to the moon.

That suggests to space policy observers that a Biden administration will continue the Artemis program, but at a slower pace. “I don’t think Artemis will get canceled. I also don’t think it will get any more money than what it’s currently getting,” said Wendy Whitman Cobb, a professor at the U.S. Air Force School of Advanced Air and Space Studies whose research focus is on space policy, during a panel discussion later at the SPARC conference.

“I think the 2024 deadline has always been a little bit iffy, just given the history of large-scale space projects,” she added. “A Biden administration might feel a little bit better about letting that go a little bit.”

She speculated that a Biden administration might support more commercialization efforts, given the efforts when Biden was vice president in the Obama administration to push for the commercial crew program. However, she did not think there would be significant changes in the Artemis program beyond limits to its funding.

“There’s a sort of momentum that already has developed. It’s hard to speed it up, but it’s also hard to slow it down at this point.”