Redmond, Washington-based Kymeta will use its new funding to complete development of its second-generation flat-panel antenna, the u8, ahead of a release late this year, Walter Berger, president and chief operating officer of Kymeta, said in an interview.
SpaceNews 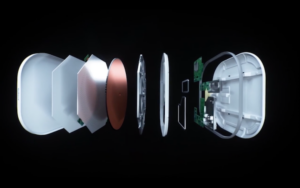 Redmond, Washington-based Kymeta will use its new funding to complete development of its second-generation flat-panel antenna, the u8, ahead of a release late this year, Walter Berger, president and chief operating officer of Kymeta, said in an interview.

The funding will also help bolster sales efforts at Kymeta and through distribution partners, and support the development of new products, such as the company’s Kymeta Connect subscription service, which bundles antennas with satellite and cellular capacity in monthly subscription plans, he said.

Berger said Kymeta is not disclosing how much it has raised in total, but that Bill Gates contributed $78.5 to the company’s most recent round and has been a consistent supporter. Kymeta will likely raise additional funds in the future, he said.

The capital raise is the fourth Kymeta has publicly announced since forming in 2012, either through press releases or mandated regulatory disclosures with the U.S. Securities and Exchange Commission, bringing total disclosed funding to $282.2 million. Kymeta began shipping antennas in 2017.

Kymeta has described mobile communications verticals such as maritime and railways as a target market, but has in recent months paid greater attention to military customers and first responders.

“What the company has done is looked at where our product and its features are going to be most relevant and most able to penetrate,” Berger said. “The first responder and DoD and government are going to be there. There’s an immediate need for the type of product we have.” That assessment took place over the past 12 to 18 months, he said.

Kymeta is still selling antennas into mobile communications markets, Berger said, but will address them more slowly given its redoubled focus on military and first responders. “We have to pace our way into it,” he said.

Berger said Kymeta views its antennas as enabling technology for geostationary satellites and upcoming low-Earth-orbit broadband constellations. The company’s u8 antenna is designed to link with up to three Ku-band satellites simultaneously, a feature that enables uninterrupted connections with low Earth orbit satellites.