Mynaric, a Germany-based manufacturer of optical satellite terminals, is expanding its footprint in the United States and opening an office in Washington D.C.
SpaceNews 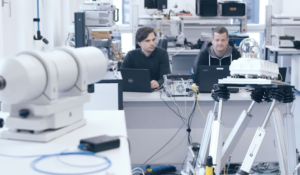 WASHINGTON — Mynaric, a Germany-based manufacturer of optical satellite terminals, announced Feb. 2 it is expanding its footprint in the United States and opening an office in Washington D.C.

The company currently operates in the United States from Los Angeles but wants “to be closer to U.S. government organizations driving the adoption of laser communications,” Mynaric said in a news release.

The move coincides with a projected surge in the demand for optical communications terminals as U.S. government and private companies plan deployments of new constellations. Laser links beam data from space to the ground or across satellites in space at much faster speeds than radio-frequency links, and are considered more cyber secure.

“The U.S. government is the driving force for the rapid deployment of laser communication capabilities and as such also a catalyst for the adoption by commercial stakeholders,” Mynaric said.

A key target customer is the Pentagon’s Space Development Agency that plans to procure hundreds of satellites equipped with laser communications terminals. The agency this summer released technical standards for optical inter-satellite links that vendors must follow in order to be selected for SDA programs. All satellites procured by SDA have to be interoperable and the optical links are critical to make that happen.

In the U.S. military market, Mynaric already has a foot in the door as its optical terminals were selected by Telesat for satellites that will be flown as part of the Defense Advanced Research Projects Agency’s Blackjack program.

Telesat, a satellite operator based in Canada, plans to build a constellation of 298 internet satellites in low-Earth orbit, all of which will have four optical links.

Lockheed Martin, which is producing satellites for the Space Development Agency, teamed with Telesat to demonstrate interoperability between the optical inter-satellite links of SDA’s satellites and those of Telesat’s LEO constellation.

The market research firm NSR estimates a $3.8 billion global market for optical communications terminals by 2029, a demand of nearly 11,000 units based on projected commercial LEO constellations.