Rep. Don Beyer: There could be “years of rule making” on remote sensing.
SpaceNews 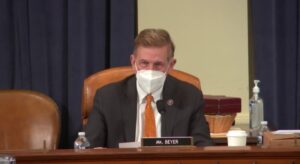 The revamped regulations were intended to help U.S. remote sensing companies compete in the booming global market for space-based data.

But as the industry continues to introduce increasingly sophisticated products, it may be time to consider additional rules to ensure technologies do not infringe on privacy or compromise national security, said Rep. Don Beyer (D-Va.), chairman of the House Science, Space and Technology subcommittee on space and aeronautics.

The recent rule change reduces the regulatory burden for most companies and imposes restrictions mostly on companies that offer a completely novel capability that is not available in the open market.

Speaking March 17 at a Politico event, Beyer said there are probably other reasons to restrict remote sensing licensing other than having a “novel capability.”  There are “issues of access and resolution” that could impact national security and especially privacy, said Beyer, “where Congress is going to have to strike a balance.”

The U.S. government is going to be using more commercial geospatial intelligence services so Congress will have to take that into account, Beyer said. “The challenge will be for us to find the right place to regulate. You don’t want to over regulate but on the other hand, there are national security and privacy concerns that are going to be raised.”

Beyer said there could be “years of rule making coming before us.” But he doesn’t foresee any legislative moves in the near future. “In Congress where everything moves very slowly anyway, I wouldn’t expect that we’re going to see lots of new legislation anytime soon.”

He suggested access to remote sensing should be discussed “at the arms control level.” One option could be a Geneva Convention type agreement “to commit to a resolution on privacy on who can have access to this data, and sort of learn how the data is used,” Beyer said. When one considers how artificial intelligence and machine learning algorithms are applied to this data, “it becomes pretty scary pretty fast unless there’s some kind of universal understanding of how it can be used.”

Megan Coffer, research scientist at North Carolina State University’s Center for Geospatial Analytics, said the use of satellite imagery to spy on individuals raises ethical concerns but it’s not an issue that will likely harm the industry. Speaking at the Politico event, she noted previous legal cases involving Google Earth or aerial imagery that were ruled in favor of remote sensing providers. She said there is a need for transparency on who has access to imagery and what purposes it’s used for.

Another issue to consider is that while the United States and European countries have similar types of regulations for remote sensing, there are far fewer rules in other countries, including China and India, which are quickly advancing the technology, said Coffer. “Congress will need to make some decisions at the national level but satellites don’t follow national boundaries. This is a greater conversation that we’re going to have to have as other countries are also advancing in their capabilities.”