Rep. Jim Cooper added his voice to the chorus of lawmakers demanding that the Biden administration investigate the Air Force’s decision to move Space Command from Colorado to Alabama.
SpaceNews 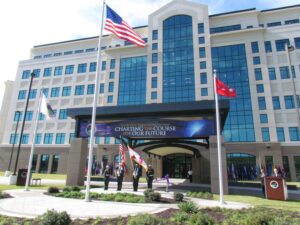 WASHINGTON — Rep. Jim Cooper (D-Tenn.) on Jan. 27 added his voice to the chorus of lawmakers demanding that the Biden administration investigate the Air Force’s decision to move U.S. Space Command from Colorado to Alabama.

Speaking on a Politico live webcast, Cooper alleged political corruption in the selection of Redstone Arsenal in Huntsville, Alabama, as the future location of U.S. Space Command’s headquarters.

Former Air Force Secretary Barbara Barrett announced the decision Jan. 13, one day before stepping down from her post.

Cooper, the chairman of the House Armed Services Committee’s strategic forces subcommittee, had previously mocked the Air Force’s process for the selection of a new Space Command location as a wasteful “moondoggle.”

At the Politico event on Wednesday, Cooper said he would support an investigation of how the selection was made. According to insiders and “scuttlebutt,” Barrett went to the White House to brief President Trump with a folder that said “Colorado” but the president decided it should be Alabama as a gift to his political allies, said Cooper.

“We’ve got to be careful with this and get it started on the right foot,” said Cooper. “We need a decision on the merits.”

In a letter to President Biden and Defense Secretary Lloyd Austin, the Colorado delegation asks for a probe into ‘reports of political influence” There is evidence “President Trump’s political considerations influenced the timing and final decision,” said the Jan. 26 letter.