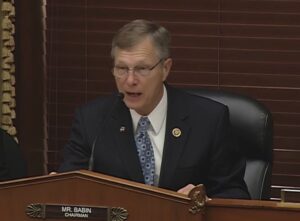 WASHINGTON — The top House Republicans on the committee that oversees civil and commercial space are asking the Biden administration to update lawmakers on its plans regarding space security and space traffic management.

Rep. Frank Lucas (R-Okla.), ranking member of the House Committee on Science, Space and Technology; and Rep. Brian Babin (R-Texas), ranking member of the committee’s space and aeronautics subcommittee, on March 5 asked the Defense and State Department for details on their plans to propose rules and protocols for space activities.

In letters to Secretary of State Antony Blinken and Defense Secretary Lloyd Austin, the lawmakers noted that their committee has for decades been “significantly involved in the development of rules of behavior in space” and intends to continue that involvement.

Lucas and Babin asked for details regarding U.S. plans to draft language in response to a United Nations General Assembly resolution that calls for norms of responsible behavior in space. The lawmakers cited a Feb. 24 SpaceNews interview where Maj Gen DeAnna Burt, commander of U.S. Space Command’s Combined Force Component Command, discussed these initiatives. Burt said a code of conduct is necessary to keep space safe for civil, commercial and military operations.

The committee wants to make sure efforts to regulate space activities are coordinated with Congress as they “will have a significant impact on not only the future of U.S. government activities in space, but also the U.S. private space sector’s ability to continue to prosper.”

“Without coordination with the Congress and specifically the House Committee on Science, Space, and Technology, any proposal offered to the United Nations could create confusion, complicate the enactment of statutes implementing such proposals, and conflict with existing statutes, policies, and constitutional rights,” Lucas and Babin wrote.

They warned that “failure to keep Congress informed could also be viewed as an attempt to limit private sector activities and undermine the rights of U.S. citizens by using treaties to circumvent Congress’s Article 1 prerogatives.”

The committee asked DoD and State to submit by March 12 any proposed language or draft documents being prepared for formal presentation to the United Nations.

In a separate letter to Commerce Secretary Gina Raimondo, Lucas and Babin requested updates on the administration’s plans to fund and staff the Office of Space Commerce.

The Trump administration in 2018 directed Commerce to take over space traffic management duties currently performed by the Defense Department, such as tracking the location of satellites and debris, and sharing that data with satellite operators in order to prevent collisions in orbit.