Lockheed Martin CEO Jim Taiclet said he expects the U.S. government to approve the company’s proposed $4.4 billion acquisition of Aerojet Rocketdyne despite concerns that it could reduce competition in the hypersonic weapons market.
SpaceNews 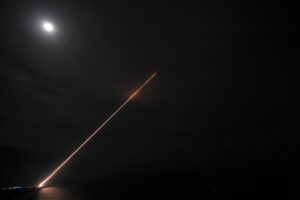 WASHINGTON — Lockheed Martin CEO Jim Taiclet said he expects the U.S. government to approve the company’s proposed $4.4 billion acquisition of Aerojet Rocketdyne despite concerns that it could reduce competition in the hypersonic missiles market.

During a call with analysts Dec. 21 Taiclet said Lockheed Martin views the acquisition as critical to the future of its missile defense, hypersonic weapons and space businesses. Aerojet is a manufacturer of rocket and missile propulsion systems.

Taiclet said a similar scenario unfolded in 2017 when Northrop Grumman moved to acquire Orbital ATK. The combination made Northrop Grumman the nation’s dominant supplier of large solid rocket motors. Regulators approved the deal in 2018 on condition that Northrop agreed to supply motors to its competitors.

Taiclet argued that his company’s acquisition of Aerojet fits the same mold. “There’s already an example of how DoD handled a prime contractor in the space domain taking in a propulsion supplier,” he said. “Our overall expectation is that this may be the same lens through which this transaction is viewed.”

Analysts however don’t see it as a shoo-in, as this transaction will be reviewed by a different administration.

“Lockheed believes that it will get regulatory clearance for this deal, but it does mean that it will be the defense M&A test case for the incoming Biden DoD team,” Robert Stallard of Vertical Research Partners wrote in an email to clients.

Lockheed is a top missile producer for DoD. A vertical integration with its propulsion supplier should reduce costs to the military, Stallard said. “But we still expect the new team to give this transaction a thorough review.” With hypersonic weapons poised to become a key U.S. defense market, “we’ll be interested to see if Raytheon responds in any way.”

Taiclet said he could not predict the Biden administration’s views on defense mergers, but he said Lockheed Martin will make a strong case that the acquisition will reduce costs for DoD and NASA. Aerojet Rocketdyne makes large liquid-fueled engines for space launch vehicles.

“We expect they’ll see the benefits,” he said. Government agencies will be under fiscal pressures, he added. “They are going to be asked to do more in these areas in a flat budget and uncertain economic times.”

Industry consultant Loren Thompson, who works with both Lockheed Martin and Aerojet Rocketdyne, argued in a Forbes.com article that Lockheed’s purchase of Aerojet levels the playing field in the solid-rocket motors market that Northrop Grumman largely owns.

“Aerojet Rocketdyne will now have the same kind of financial resources to draw on as Orbital did when it joined Northrop,” Thompson wrote. “The transaction assures that the large solid rocket motors segment will remain competitive rather than devolving to a monopoly.”

Industry analyst Byron Callan, of Capital Alpha Partners, said there are still many unknowns about how this merger might be seen by the Biden administration. “It may take weeks and months before those views are known,” he wrote in a note to clients.

He suggested Raytheon or even Boeing could challenge the acquisition on grounds that it would give Lockheed too much power over the hypersonic weapons and missile defense markets. “We have moderate confidence that this deal will be completed, pending better visibility on who is appointed and confirmed at DoD by the Biden administration,” Callan said.

About 33% of Aerojet’s sales are to Lockheed Martin and 17% to Raytheon, according to Callan. “Raytheon and Boeing may see the Lockheed-Aerojet deal as a competitive threat, but we don’t yet know if this is true and, if so, how hard they will push DoD and other Justice or Federal Trade Commission on this issue. The FTC reviewed the Northrop Grumman-Orbital ATK deal in 2018.

Boeing in 2019 complained in a letter to the Air Force that Northrop Grumman’s dominance of the solid propellant rocket motors market gave it an insurmountable cost advantage in the Ground Based Strategic Deterrent intercontinental ballistic missile program, which Northrop won after Boeing bowed out.

Under an agreement with the Air Force to ensure there’s a second supplier of solid rocket motors, Northrop Grumman has to outsource the upper stage work of the GBSD missile to Aerojet Rocketdyne.

Besides the hypersonic weapons market, getting a piece of GBSD was another strong motivator for Lockheed Martin to pursue this acquisition, said Andrew Penn, an aerospace industry analyst at the consulting firm Avascent.

“The story of the Aerojet acquisition has far less to do with space and more to do with hypersonics and missile defense,” he told SpaceNews. “This is a hypersonics first deal, then GBSD, then space.”