Lockheed Martin’s satellites for the SDA will be about 150 to 200 kilograms and will use Tyvak’s Mavericks platform.
SpaceNews 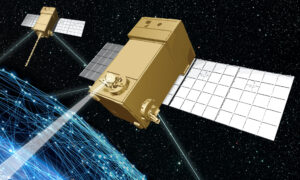 Lockheed Martin and York Space Systems were selected by the SDA to each produce 10 satellites that will be part of a mesh network in low Earth orbit known as Transport Layer Tranche 0.

Eric Brown, Lockheed Martin’s director of military space mission strategy, told SpaceNews that the satellites will be about 150 to 200 kilograms and will use Tyvak’s Mavericks platform.

“We got a very strong offer from Tyvak,” he said. “We are designing for production, to generate volume.”

SDA is buying 20 satellites to launch in 2022 but plans to deploy hundreds more in the future.

Telesat will be on the team as a technical advisor. “We brought in Telesat to provide insight into networking processes you’d expect on the commercial side,” said Brown.

Lockheed Martin previously worked with Tyvak on a mesh network in space demonstration known as “Pony Express.” Brown said the expertise gained in that demonstration helped Lockheed Martin win the SDA contract. The Transport Layer has to route data from ground station to satellites in orbit and back to the ground to wherever military forces need the data.

Seven of the 10 satellites under the SDA contract must have four optical inter-satellite cross links per spacecraft. The other three must have two cross links and two downlinks.

Brown said Lockheed Martin has selected a supplier for the optical links but could not disclose the name at this time.

The satellite downlinks have to connect to the military data networks Link 16 and Integrated Broadcast System. Future satellites are expected to have to communicate with the Lockheed Martin-made F-35 combat aircraft which uses a different data network known as the Multifunction Advanced Data Link.

‘We’re beginning to anticipate requirements for F-35 in the future,” said Brown.

SDA Director Derek Tournear said that even though Lockheed Martin’s satellites are more expensive, the agency selected the company because it provided overall higher value.

Brown said SDA couldn’t rely only on space companies to build the Transport Layer and needed a contractor with “awareness of the overall mission, not just the space piece but across domains.”