Lockheed CFO Ken Possenriede: “We now have a price point that will allow ULA to get its fair share of awards over SpaceX”
SpaceNews 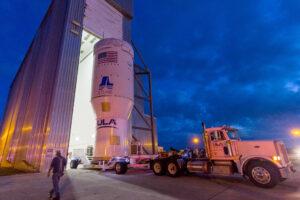 WASHINGTON — United Launch Alliance has seen its business threatened by the industry’s increasingly dominant player SpaceX. But ULA has been able to fight back and stay competitive, Lockheed Martin executives said Oct. 20 during a third-quarter earnings call with analysts.

“We now have a price point that is compelling to customers that will allow ULA to get its fair share of awards over SpaceX,” said Lockheed Martin’s chief financial officer Ken Possenriede.

ULA is jointly owned by Lockheed Martin and Boeing.

Possenriede credited ULA for its recent success. ULA and SpaceX were the winners of the National Security Space Launch Phase 2 procurement — ULA was awarded 60 percent of the missions to be flown over five years, and SpaceX got 40 percent.

“What I would say is, of the recent competitions we’ve had with them, we’ve actually been pleased with the outcome of where ULA landed relative to SpaceX,” Possenriede said. “Going forward we’re confident.”

Lockheed Martin CEO Jim Taiclet told analysts that the company is bullish about the space business. Space programs account for about $12 billion of Lockheed Martin’s $65 billion in annual sales.

Taiclet said the company continues to generate profits from traditional military satellite constellations such as the Space Based Infrared System, the Advanced Extremely High Frequency  and the Global Positioning System. But he said a “real breakthrough” for Lockheed Martin was to win a Space Development Agency contract for 10 satellites that will be part of a low-orbit constellation “similar to what you’re hearing about in the commercial sector that we’ll be able to transmit 5G speed, capacity and latency signals between all domains,” Taiclet said.

The Space Development Agency’s Transport Layer mesh network is “sort of one of the first elements of what we would envision in the future as a 5G.mil architecture,” he said. “So yeah, it’s an important piece. This will be a competitive space, but we want to get out in front of it.”