Lockheed Martin has been awarded a $4.9 billion contract for the production of three geosynchronous Next-Generation Overhead Persistent Infrared satellites.
SpaceNews 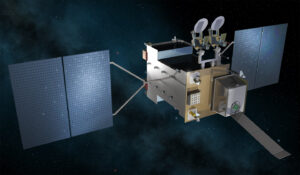 The satellites will be operated by the U.S. Space Force and provide initial warning of a ballistic or tactical missile launch anywhere on the globe.

The Space and Missile Systems Center in August 2018 awarded Lockheed Martin a $2.9 billion contract for the development of the three GEO satellites. The new contract is for manufacturing, assembly, integration, testing and delivery by May 2028.

The Space Force said the Next-Gen OPIR satellites will expand and eventually replace the coverage provided by existing Space Based Infrared System satellites, which also were made by Lockheed Martin. The goal is to deploy the new satellites by 2029.

The Space Based Infrared System satellites were criticized in 2017 by Gen. John Hyten — who is currently the vice chairman of the Joint Chiefs of Staff and previously was commander of U.S. Strategic Command — for being “juicy targets” for enemy anti-satellite weapons. That led the Air Force to accelerate the development of the new constellation.

Air Force officials said the Next-gen OPIR spacecraft have more powerful sensors and other features that make them more resilient against attacks than current satellites.