SMC on Oct. 7 exercised an option under a 2018 contract to purchase two more GPS 3F satellites from Lockheed Martin for $511 million.
SpaceNews 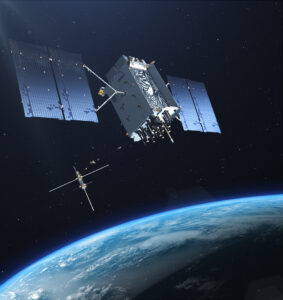 WASHINGTON — The U.S. Space Force is buying two more GPS satellites from Lockheed Martin for $511 million. The contract was awarded Oct. 7 but was not publicly announced because it was an option exercised under a 2018 deal.

GPS 3F is the newest version of the satellites that provide global positioning, navigation and timing services. They have a fully digital navigation payload and their signals are better protected against jamming and other forms of interference.

The latest contract is for space vehicles 13 and 14. The $511 million price for satellites 13 and 14 is lower than satellites 11 and 12 because the $1.3 billion 2018 contract included development costs.

SMC purchased GPS 3F space vehicles 13 and 14 after the satellite passed a critical design review earlier this year. “The program employed an intensive yearlong process which validated the GPS 3F design as a low risk,” said the spokesperson.