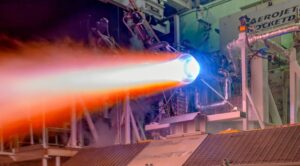 “The proposed acquisition adds substantial expertise in propulsion to Lockheed Martin’s portfolio,” the company said in a news release.

Aerojet Rocketdyne’s 2019 revenues were approximately $2 billion. The company, headquartered in El Segundo, California, has nearly 5,000 employees. Aerojet Rocketdyne was formed in 2013 when GenCorp’s Aerojet and Pratt & Whitney Rocketdyne were merged,

With Pentagon funding, the company developed a new rocket engine called AR-1 that was positioned to compete to be the main engine of ULA’s new Vulcan launch vehicle but ULA ended up selecting Blue Origin’s BE-4.

The acquisition is expected to close in the second half of 2021. It is subject to regulatory approvals and has yet to be approved by Aerojet Rocketdyne’s stockholders.

Lockheed Martin said a transition team will be formed to help ease the integration and ensure continuity for customers and employees.