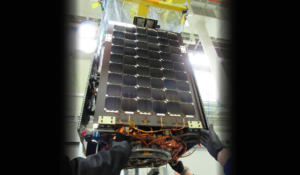 WASHINGTON — The Pentagon’s space agency on Aug. 31 announced the first major contract awards for a network of satellites in low Earth orbit that will talk to each other and relay data down to military forces on the ground, on ships or airplanes.

Each company is responsible to provide 10 satellites and all 20 will be launched by September 2022, SDA Director Derek Tournear told reporters Aug. 31 in a video conference.

The SDA was stood up in 2019 as a separate agency with a mandate to build space systems for the military faster than traditional Pentagon procurements. Tournear said the solicitation for the Transport Layer Tranche 0 was issued May 1 and the agency is making contract awards four months later, which is a short timeline compared to most Pentagon satellite contracts.

Lockheed Martin and York Space are the first contractors selected but more will be picked in later tranches, said Tournear. “We’ll be soliciting every two years,” he said. SDA satellites will be vendor neutral, meaning that they all have to be to talk to each other regardless of who builds them.

“This is a new model,” said Tournear. “We’ll have new acquisitions for each layer and each tranche.”

Each batch of 10 satellites that Lockheed Martin and York Space will make have to be broken down into two types. Seven of the 10 have to be equipped with four optical cross links per spacecraft, and three with two cross links and two downlinks.

The satellites with two optical cross links also must have two transmitters to connect to the Link 16 network that the military uses to share data across hundreds of weapons systems.

As to why Lockheed Martin is getting twice the money that York Space gets for the same number of satellites, Tournear said each vendor’s bid was evaluated individually based on technology, price and schedule.

“We asked for firm fixed price bids,” said Tournear. “We had several providers that came back with a range of different technical solutions and a range of prices.”

Lockheed Martin and York “each one came back with just an outstanding technical solution, with a good focus on schedule because they know that’s important,” said Tournear. “We awarded them based completely on the technical merit and what we thought was their ability to be able to make schedule and provide a solution. And the price was factored in.”

Each of the satellite providers selects their own suppliers for the optical links, said Tournear.

SDA vendors’ hardware will have to show that they’re compatible with each other. The Naval Research Laboratory developed a “hardware in the loop, software in the loop testbed” that will be used to validate that all vendors’ satellite buses and optical links are interoperable.