Maxar Technologies is continuing to diversify its business but remains in the “early innings” in attracting expanding defense and intelligence work, said Dan Jablonsky, Maxar president and CEO.
SpaceNews 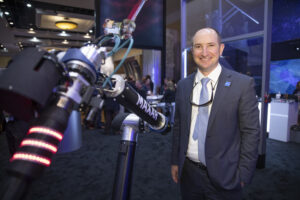 SAN FRANCISCO — Maxar Technologies is continuing to diversify its business but remains in the “early innings” in attracting more defense and intelligence work, said Dan Jablonsky, Maxar president and CEO.

“It’s a multiyear journey that we’re on,” Jablonsky said Feb. 24 during a company earnings call. “We do expect to gain programs over time and we’ve been upgrading our talent to be able to tackle this.”

Since taking the helm of Maxar in 2019, one of Jablonsky’s goals has been to diversify revenues to derive about a third from commercial, a third from civil government and a third from military and intelligence contracts.

Maxar has steadily expanded its civil business, largely by winning NASA science and exploration contracts, including the lunar Gateway Power and Propulsion Element.

Another Maxar priority is winning Earth-intelligence contracts and ensuring the business is headed “for sustained growth moving forward,” Jablonsky said.

“This means we’ll be focused on launching the WorldView Legion constellation, successfully competing for the next iteration of the EnhancedView program and continuing to make investments in 3D, artificial intelligence and machine learning,” Jablonsky said.

“We’re capacity constrained,” Dan Jablonsky, Maxar president and CEO, said Feb. 24 during a company earnings call. “Toward the end of the year, that flips into a lot of capacity.”

“We’ll be looking to get our fair share of those awards,” Jablonsky said. “There are some low-Earth orbit opportunities out there.”

For the fourth quarter ended Dec. 31, Maxar revenues from continuing operations increased to $467 million from $410 million a year earlier. Revenues for the year rose to $1.7 billion from $1.67 billion for 2019.

In the fourth quarter, Maxar reported a net loss from continuing operations of $52 million, compared with net income of $53 million for the last three months of 2019. “The decrease was primarily driven by a gain on sale of assets of $136 million in 2019 that did not reoccur in 2020,” which was partially offset by increased revenues from the firm’s Space Infrastructure business, according to a Maxar news release.

“The decrease was primarily driven by the receipt of satellite insurance proceeds of $183 million and a gain on sale of assets of $136 million in 2019 that did not reoccur in 2020,” according to the news release.

Maxar provided some information on the Sirius XM-7 satellite failure reported to the U.S. Securities and Exchange Commission on Jan. 27 by Sirius XM Holdings.

As of Dec. 31, the satellite launched Dec. 13 “was functioning as intended,” Maxar said in its annual 10-K report.

“There is an evaluation underway to determine the extent of damage to its SXM-7 satellite caused by certain events on January 16, 2021,” the Maxar 10-K said.

During the earnings call, Jablonsky said, “We don’t have anything to report on the continued troubleshooting work we’re doing with the satellite and with the customer.”