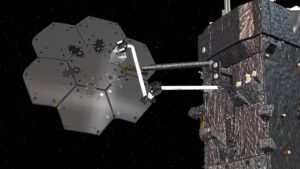 “These contracts position MDA for continued success in the commercial space robotics market, an emerging business area forecast to generate global revenues in excess of $4.5 billion in the next 10 years,” MDA CEO Mike Greenley said in a statement. “Our work on this program will leverage over 40 years of spaceflight heritage and a successful track record in design, development and operational support of space robotics.”

Under the contracts announced Nov. 17, MDA will deliver a suite of advanced robot control software and interfaces to assist with assembly and servicing tasks expected to be performed for the first time on the OSAM-1 mission.

In addition, Maxar is hiring MDA to deliver the motor control electronics and arm control electronics on the SPIDER robotic arm. “These essential components drive and control each of the motors and joints of the arm as well as providing the data routing and interfacing between joints and cameras,” according to the news release.

MDA plans to deliver the various products to Maxar in mid-to-late 2021.

The various technologies “will not only support the goal of making on-orbit assembly commercially viable, but could also support other on-orbit services like debris removal, anomaly resolution, life extension and salvage of stranded spacecraft,” according to the news release.

OSAM-1, a NASA mission previously known as Restore-L, is scheduled for launch in 2024. Maxar is building the OSAM-1 satellite to rendezvous with the Landsat 7 spacecraft and refuel it, before conducting a series of demonstrations of in-space robotic assembly including SPIDER.

For the SPIDER demonstration, NASA awarded Maxar a $142 million contract in January to robotically assemble a communications antenna and manufacture a spacecraft beam in orbit.

Maxar announced in April it was selling MDA for $729 million to a consortium of investors led by Northern Private Capital of Toronto.