The Russian founders of in-space transportation company Momentus have placed their shares into a voting trust and will sell them in the next three years as the company attempts to address U.S. government concerns about its foreign ownership.
SpaceNews 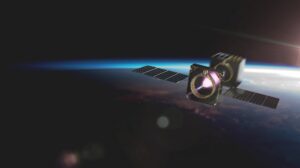 WASHINGTON — The Russian founders of in-space transportation company Momentus have placed their shares into a voting trust and will sell them in the next three years as the company attempts to address U.S. government concerns about its foreign ownership.

In a March 8 filing with the U.S. Securities and Exchange Commission, Momentus and Stable Road Acquisition Corporation, the special-purpose acquisition company (SPAC) planning to merge with Momentus, said that both former chief executive Mikhail Kokorich and Brainyspace LLC, a firm owned by co-founder Lev Khasis and his wife, had relinquished their ability to directly vote their shares in the company, effective March 1.

Kokorich had been chief executive of Momentus until Jan. 25, when the company announced that he was resigning, effective immediately. At the time Momentus said his resignation was “an effort to expedite the resolution of U.S. government national security and foreign ownership concerns,” but didn’t elaborate on those concerns.

In the new SEC filing, Momentus said that on Jan. 21 the company “became aware of correspondence from the U.S. Department of Defense stating Momentus posed a risk to national security as a result of the foreign ownership and control of Momentus by Mikhail Kokorich and Lev Khasis and their associated entities.” That correspondence, the company said, led to Kokorich’s resignation as chief executive and other measures, including the voting trust and plans by Kokorich and Brainytrust to divest their shares.

The company also submitted a voluntary notice to the Committee on Foreign Investment in the United States (CFIUS), which reviews certain foreign investments in American companies. CFIUS formally started a 45-day review of Momentus and its ownership that is scheduled to end April 12. If necessary, CFIUS could then perform an investigation that would last no more than 60 days.

Momentus said it informed CFIUS it is willing to “enter into a mitigation agreement with the U.S. government to resolve any national security concerns that the U.S. government has relating to foreign ownership and control of Momentus.” That would include an independent audit of the company’s technology, development of a data security plan and hiring of a security officer to oversee any agreement with the federal government.

The Defense Department’s concerns also led to a delay in the first launch of the company’s Vigoride transport vehicle. The Vigoride-1 was to be one of the payloads on a Falcon 9 Transporter-1 dedicated rideshare mission that launched Jan. 24, maneuvering into a different orbit and deploying several cubesats. Momentus said Jan. 4 that it would not fly on that launch because of delays in getting approval from the Federal Aviation Administration.

In the filing, Momentus said the FAA “ultimately determined that it was unable to grant to SpaceX an approval of the Momentus payload for the SpaceX Transporter-1 launch in January 2021 due to national security and foreign ownership concerns regarding Momentus raised by the Department of Defense during an interagency review.” The company said it’s working with the FAA on a payload review independent of any launch license “in order to mitigate any national security concerns relating to foreign ownership and control of Momentus and to facilitate accelerated reviews of future launch vehicle licenses.”

Momentus said in January it would fly the Vigoride-1 mission on a SpaceX rideshare mission later in the year, and in the filing said it was targeting a launch in June. It warned, though, that there was no guarantee it could get a license in time for the June launch “especially in light of the ongoing review by CFIUS, in which case we may be required to remanifest our payload to a later date.”

The SEC filing also revealed that Momentus secured a $25 million loan agreement Feb. 22 from Venture Lending & Leasing IX, Inc., which the company had fully borrowed on March 1. The agreement allows the company to borrow an additional $15 million by the end of June if it obtains a payload approval from the FAA and also closes equity financing of at least $25 million. The loan, with a 12% annual interest rate, would have to be repaid by March 2022 unless Momentus extends the loan for up to two years.

Both Momentus and Stable Road still expect to complete the merger agreement, which will provide Momentus with $310 million in cash from both Stable Road’s funds and a concurrent private investment round. Stable Road noted in the SEC filing that it does not believe the merger itself is subject to CFIUS review.

Stable Road has not set a date for the shareholder vote about the merger with Momentus. A SPAC typically has a limited time to complete a merger or else return its proceeds to shareholders, and Stable Road noted in the SEC filing that deadline is May 13. However, that deadline can be extended with the approval of shareholders if the SPAC needs more time to close a merger.