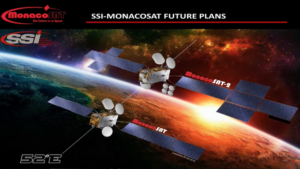 “You cannot stop with one satellite, so now we are developing the new satellite,” Ilhami Aygün, CEO of MonacoSat, said during a Sept. 1 webinar for the 5th Global Satellite and Space Show. “Towards the end of the year, we may finalize this project and announce the manufacturer.”

MonacoSat’s first satellite, TurkmenAlem-52E/MonacoSat, launched in 2015 and provides Ku-band coverage over Europe, the Middle East, Northern Africa and Central Asia for television broadcasting and internet connectivity services. The government of Turkmenistan financed the satellite, as well as the launch and ground infrastructure, and partnered with the company Space Systems International — Monaco to use the Monacan government’s orbital slot at 52 degrees East.

Aygün said the government of Turkmenistan is using two-thirds of the capacity on TurkmenAlem-52E/MonacoSat, and that MonacoSat is ready to expand.

The second satellite, called MonacoSat-2, will be fully software defined and will provide communications services in Ka-band frequencies, he said.

SSI-Monaco and the Monacan government are collaborating on MonacoSat-2, Aygün said. The satellite will have reconfigurable capacity — a feature satellite operators are growing to expect from manufacturers —  which will “drastically” drop the price per megabit, he said.

Aygün didn’t say when the satellite will launch, where it will cover, or what, if any, role the Turkmen government will have. He did weigh in on demand trends for satellite communications providers, saying that internet connectivity is becoming an expected utility, much like water and electricity, and that satellites can help meet that demand. MonacoSat sees video broadcasting increasingly switching from linear satellite distribution to IP-based delivery systems, which is also increasing demand for broadband, Aygün said.

MonacoSat is among a cadre of new satellite operators that have emerged in recent years across Europe, alongside BulgariaSat in Bulgaria and Belintersat in Belarus, each of which operates a single geostationary satellite. That list continues to grow, most recently with an August announcement by Hungarian communications company 4iG that it, alongside two other domestic companies, plan to launch Hungary’s first commercial geostationary satellite in 2024 and operate it through a joint venture called CarpathiaSat.