As Nanoracks puts the finishing touches on an airlock that will be installed on the International Space Station later this year, the company is finalizing a new funding round.
SpaceNews 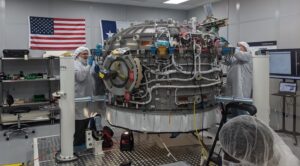 WASHINGTON — As Nanoracks puts the finishing touches on an airlock that will be installed on the International Space Station later this year, the company is finalizing a new funding round.

The Bishop airlock module is undergoing final preparations at Nanoracks’ headquarters in Houston. The module will be shipped later this month to Florida to be integrated with a SpaceX Dragon cargo spacecraft launching to the ISS in November.

Bishop will ultimately be installed on the Tranquility, or Node 3, module of the ISS. The module can be loaded with satellites to be deployed from the station or other payloads seeking to be exposed to the space environment. Once the payloads are loaded into the airlock, the station’s robotic arm detaches Bishop from Node 3 and reinstalls it once complete.

“It is really simple. It is just an open-ended cup,” said Mike Lewis, chief innovation officer of Nanoracks, during a virtual tour of the airlock. It relies on existing ISS systems for capabilities such as “air-save” pumps to remove air from the module, losing only 2% of the air in each airlock cycle.

Nanoracks started development of Bishop several years ago to meet the growing demand for satellite deployments from the station. The company has used the airlock on the Japanese Kibo module on the station for deploying hundreds of cubesats. The limited capacity of that airlock led Nanoracks to pursue a commercial airlock with a volume several times greater.

Nanoracks envisions using Bishop for more than satellite deployments. The airlock can host payloads both in the interior of the module and on its exterior. One of the first customers for Bishop is the Japanese robotics company GITAI, which will test a robotic arm in the airlock next year.

Bishop will be available to customers shortly after arriving at the station. Brock Howe, project manager for Bishop at Nanoracks, said the station’s robotic arm should remove Bishop from the trunk of the Dragon spacecraft a day or two after the Dragon docks with the station.

Once removed from Dragon, the airlock will go through some inspections and tests before it is installed on Node 3 and undergoes final leak checks. “Then we’re ready to go,” he said. “Within a couple days we can be ready for payloads.”

Bishop is designed for 10 pressure cycles a year over 10 years, although the actual usage is primarily constrained by crew time and access to station resources like the robotic arm. Howe said that Bishop has plenty of engineering margin, suggesting it could operate for more than 100 cycles. “With a little bit of sharpening of our pencils we can probably get a lot more cycles out of that,” he said.

Bishop could eventually move from the ISS to another spacecraft, like a commercial space station that Nanoracks, among other companies, has proposed developing. Bishop will be compatible with any vehicle with an active common berthing mechanism, and Lewis said the company could adapt the Bishop design for other interfaces, like the International Docking Adapter.

Those efforts will be bolstered by a new round of funding. In a Sept. 16 tweet, Jeffrey Manber, chief executive of the company, offered “thanks to investment bank Cambridge Wilkinson working with us to raise equity for our new chapter of commercial use of space!”

Exciting week as friends and families see off our commercial Bishop Airlock for #ISS before it transits to the launch site for the Nov SpaceX launch. And thanks to investment bank Cambridge Wilkinson working with us to raise equity for our new chapter of commercial use of space! pic.twitter.com/grUyTnT4tB

A company spokesperson later said the company was seeking to raise $20 million in a round “which is almost fully subscribed” and expected to close in early in the fourth quarter. “Our focus of this round is on the development of in-space infrastructure and our commercial Outpost program,” its effort to convert launch vehicle upper stages into commercial space stations.