Bridenstine: “I really hope people take away from this discussion that we are an instrument of national power.”
SpaceNews 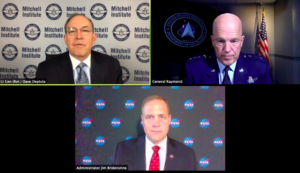 WASHINGTON — NASA and the U.S. Space Force have formally agreed to work together in areas like space policy, research, technology and the protection of the planet from hazardous objects such as asteroids.

The memorandum replaces an agreement signed 14 years ago between NASA and the U.S. Air Force Space Command, which was disestablished when the Space Force was created Dec. 20, 2019.

“Space Force looks forward to future collaboration as NASA pushes farther into the universe for the benefit of all,” said Raymond. The Space Force will ensure “freedom of action in space” so NASA can safely return to the moon and achieve human exploration of Mars.

NASA is a civilian agency and has no role in military operations. NASA would turn to the Space Force, for example, if its assets in orbit came under hostile attack. “The space domain is becoming more challenging and those challenges affect NASA just like they affect the commercial operators,” said Bridenstine. “And that’s really where we rely on the Space Force to be supportive of what we’re trying to achieve.”

Bridenstine noted that countries are acquiring lasers and other technologies to jam satellites, as well as cyber weapons to hack into space systems. “These are the kinds of things that affect pretty much everybody in the space domain,” he said.

NASA by law cannot engage directly with China, a rising space power. Given the challenges that exist in space, he said, “it is necessary to have security. And that’s why it is so important for NASA to work side by side with the Space Force.”

Bridenstine in opening comments and during the question-and-answer portion of the Mitchell Institute event was emphatic about NASA’s role as an agent of diplomacy.

He suggested that NASA’s huge international standing could be used as leverage to bring about new agreements to ensure the peaceful use of space.

As NASA prepares to go to the moon and encourages the private sector to mine resources there, “we want to see behaviors improved in space,” said Bridenstine.

“NASA plays an important role in national security,” he said. “We don’t do defense, we don’t fight and win wars, that is not our role.”

But NASA is a major piece of the larger U.S. national power, he said. “The national security community talks about diplomatic power, information power, military power, economic power. NASA plays on the diplomatic side in a very robust way.”

Bridenstine cited several examples of how NASA brings countries together:

“So this is really a tool of diplomacy for the nation,” said Bridenstine. “It is soft power.”

NASA has invited countries to join the Artemis program. “We asked who wants to be with us when we go to the moon? We had 26 nations show up. Some of them didn’t even have space agencies, but they want to be with us on the moon,” Bridenstine said. “This is a tremendously valuable diplomatic tool.”

Those basic norms of behavior, said Bridenstine, “are ultimately what will preserve space for humanity to continue doing the exploration and development, and the building of commercial capabilities.”