NASA and Boeing announced an updated schedule of test flights of the company’s CST-100 Starliner commercial crew vehicle that would allow it to begin operational missions to the International Space Station at the end of 2021.
SpaceNews 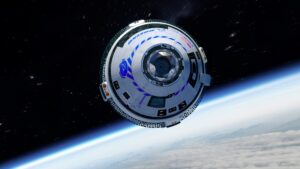 WASHINGTON — NASA and Boeing announced an updated schedule of test flights of the company’s CST-100 Starliner commercial crew vehicle that would allow it to begin operational missions to the International Space Station at the end of 2021.

In an Aug. 28 statement, NASA said it had scheduled a second uncrewed test flight, known as Orbital Flight Test (OFT) 2, for no earlier than December. That mission will be a repeat of the original OFT mission flown last December, which was cut short by technical problems that prevented the spacecraft from approaching and docking with the ISS.

The NASA statement confirmed recent comments by agency officials on the schedule for OFT-2. “The Boeing folks are working hard for their reflight to be done by the end of the year, maybe early January,” Kathy Lueders, NASA associate administrator for human exploration and operations, said in an Aug. 24 webinar during the American Institute of Aeronautics and Astronautics’ Propulsion and Energy Forum.

The problems with the original OFT mission prompted a joint review by NASA and Boeing. That led to 80 recommendations involving testing and simulation, software requirements, process and operational improvements, software updates, and knowledge capture and modifications to Starliner hardware.

NASA said that Boeing has now implemented nearly 75% of those recommendations. Boeing engineers are completing work updating and revalidating software used by Starliner, including starting a comprehensive test of flight software called Formal Qualification Testing. Software problems played a major role in the problems Starliner encountered in the OFT mission.

Assuming OFT-2 launches on the current schedule and is successful, NASA and Boeing will move on to the Crew Flight Test (CFT) mission, with NASA astronauts Mike Fincke and Nicole Mann and Boeing astronaut Chris Ferguson. The CFT mission is scheduled for no earlier than June 2021.

NASA did not announce the duration of the CFT mission. During development of Starliner, NASA proposed extending CFT by up to several months to ensure maintaining a crew on the ISS as NASA’s access to Soyuz seats ran out. With SpaceX’s Crew Dragon spacecraft soon to be formally certified for operational missions, though, that will not be necessary. If the new schedule holds, the CFT mission will arrive at the station during the Crew Dragon Crew-2 mission, set to launch in the spring of 2021 for a six-month stay.

CFT would be followed by the first operational mission, Starliner-1. That mission will fly NASA astronauts Sunita Williams, Josh Cassada and Jeanette Epps, along with a fourth crew member, likely from an international partner. Williams and Cassada were named to the mission in 2018 while Epps, who had been bumped from a Soyuz mission to the ISS in 2018, was added to Starliner-1 Aug. 25.

In its statement, NASA said Starliner-1 is scheduled for launch no earlier than late December 2021. “We’re really looking to bring both systems up an operational by the end of calendar year ’21,” Lueders said of the two commercial crew systems in the Aug. 24 webinar.

Starliner’s crew module is reusable, and Boeing plans to alternate between two crew modules for upcoming missions, company spokesperson Josh Barrett said. The crew module used for the OFT mission is being refurbished for the CFT mission, while the new crew module being readied for OFT-2 will be reused on Starliner-1.