The Department of Energy and NASA are meeting regularly to investigate how they can cooperate on technologies that go beyond their longstanding work on nuclear power systems.
SpaceNews 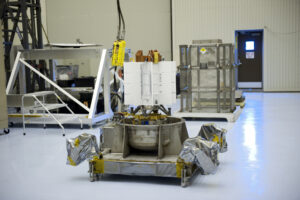 WASHINGTON — The Department of Energy and NASA are meeting regularly to investigate how they can cooperate on technologies that go beyond their long-standing work on nuclear power systems.

The two agencies held a roundtable Sept. 15 at the University of Tulsa to discuss both how they are working together as well as how they can cooperate with university researchers and companies. The 90-minute discussion touched on a wide range of technologies, from aeronautics to photovoltaics.

“What I’m looking forward to is a virtuous cycle of dialogue,” said NASA Administrator Jim Bridenstine at the meeting, “and figure out where we can find these partnerships where we can collaborate and achieve some really stunning developments.”

The Energy Department has been working to increase its collaboration both with NASA and the broader space industry. That included formally joining the National Space Council in February and establishing a “standing coordinating council” between the department and NASA to study potential joint efforts.

That council, said Undersecretary of Energy for Science Paul Dabbar at the roundtable, allows the department “to hear what NASA’s strategic vision is and the prioritization of different projects that they would go after, and to see if there’s anyone among the 60,000 who work at the 17 national labs who might have some capabilities and ideas on how to help perform that mission.”

In a separate interview, Dabbar said that council met most recently in late July at the Kennedy Space Center just before the launch of NASA’s Mars 2020 mission. “We got together and went through the major areas that have overlap, and talked about specific execution of technology development areas,” he said.

The two agencies have long worked together in the area of space nuclear power, such as the radioisotope thermoelectric generators that power missions like Mars 2020. The two are now cooperating on surface nuclear power systems as well as nuclear electric and nuclear thermal propulsion technologies.

Both NASA and the Energy Department are looking to expand that cooperation beyond nuclear power into other technologies. One area of interest is photovoltaics, a reason the two agencies held the roundtable at the University of Tulsa, which does research in the field that could lead to much thinner and lighter solar arrays. “That could be a game-changer for a number of things, but particularly for space,” Dabbar said.

Another area of interest is in basic science research. Dabbar noted that the Vera C. Rubin Observatory under construction in Chile, for which the Energy Department is funding development of its main camera, could support NASA research like the search for near Earth objects.

That research could expand to the moon. “In a few years there’s going to be an Artemis moon base, and there are discussions about using the base for science,” he said, with initial discussions underway about what kind of research the department supports that could benefit from a lunar facility.

At the roundtable, Dabbar said that the department was planning to send a request for information in the near future “to see if any of the detectors that are out there for mapping the universe might make sense to deploy on the moon.”

The Department of Energy is also seeking to expand its work with the broader space industry. “We have seen some increased traffic from space organizations and the space economy at some of our national laboratories,” said Conner Prochaska, chief commercialization officer at the Energy Department, in an interview. He didn’t elaborate on the specific work beyond it involving the commercialization of satellite technology.

Both Dabbar and Prochaska said they hope to continue to expand cooperation with NASA and the space industry over the next year. “At the Department of Energy, we solve big, hard problems,” Prochaska said. “I hope, a year from now, we can identify and show some big problems we’re able to help NASA with.”