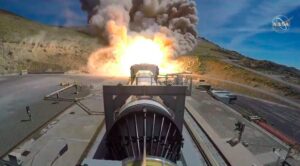 “The test looked good to us from where we were sitting,” said Bruce Tiller, manager of the SLS boosters office at NASA’s Marshall Space Flight Center, during a call with reporters an hour and a half after the test. While engineers were still examining data from the test, he said both the duration of the test and its “pressure trace,” or chamber pressure as a function of time, were as expected.

The test was designed to evaluate potential changes that would be incorporated into future boosters for missions after the third SLS flight, Artemis 3 in 2024. That included a modification in the production of the booster’s propellant caused by a change in suppliers.

“The initial purpose was to address a supplier obsolescence issue with the aluminum powder,” said Charlie Precourt, vice president of propulsion systems at Northrop Grumman. “Making sure that process delivered the exact specification of the aluminum powder, which is a key ingredient of the propellant, was a big deal.”

The test incorporated several other hardware changes, such as a revised nozzle forward exit cone housing. “Whenever we have one of these big tests like this, we try to put in every change we can to make sure it works at full scale,” Tiller said.

The SLS boosters are based on the four-segment boosters originally developed for the shuttle, but with some advancements in materials and manufacturing technologies. Northrop Grumman proposed using the same booster segments in its OmegA rocket, which it proposed to the U.S. Air Force in the National Security Space Launch (NSSL) Phase 2 competition.

“One of the design goals of OmegA was to ensure it had applicability across a number of programs,” Precourt said. “We intentionally designed the core of that vehicle to be — form, fit and function — the same as the segments of the SLS so that the tooling, equipment, facilities and workforce could be leveraged.”

One example of that leverage is that the company modernized the facility where cases for the segments are produced in anticipation for OmegA, which can be used for later SLS boosters. “We’re already tooled up to provide that to NASA at no additional cost,” he said.

“From our standpoint the OmegA work was extremely beneficial to us,” Tiller said. Some of the techniques NASA was considering for producing future booster cases are those Northrop Grumman was already applying for OmegA.

However, the Air Force did not pick Northrop’s OmegA for an NSSL Phase 2 award, instead giving awards to SpaceX and United Launch Alliance. That’s led to speculation Northrop will cancel OmegA, although the company has yet to make a formal announcement about the vehicle’s future. The loss in the competition could also lead the Air Force to terminate a Launch Service Agreement award to Northrop in 2018 valued at $792 million to support work on the rocket.

Precourt declined to directly answer questions about the status of OmegA during the media teleconference, instead emphasizing that the vehicle’s technologies will be incorporated into SLS and other programs, such as the strap-on motors Northrop is providing for ULA’s Atlas 5 and Vulcan Centaur rockets.

“The work that we’ve done with the Air Force is being debriefed and finalized,” he said, preferring to talk about the successful SLS booster test. “I think we should just celebrate that today we’ve made a huge step forward in that direction and we’re well poised, based on the parallel work we did with OmegA, to be ready to help NASA.”