After nearly two years of struggles, NASA has abandoned efforts to deploy a heat flow probe on its InSight lander into the surface of Mars.
SpaceNews 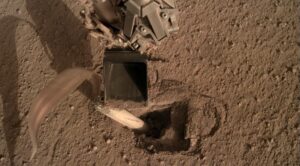 WASHINGTON — After nearly two years of struggles, NASA has abandoned efforts to deploy a heat flow probe on its InSight lander into the surface of Mars.

In a Jan. 14 statement, NASA said that a final effort to hammer the “mole” into the surface of Mars Jan. 9 failed to make any progress. The mole performed 500 hammer strokes, trying to drive itself into the surface, but remained in place just two to three centimeters below the surface.

“We’ve given it everything we’ve got, but Mars and our heroic mole remain incompatible,” said Tilman Spohn of the German space agency DLR, the principal investigator of what is formally known as the Heat Flow and Physical Properties Package (HP3), in a NASA statement.

HP3 was designed to burrow up to five meters deep into the surface, collecting data on the heat flow from the Martian interior. The lander placed the instrument package on the surface in early 2019, shortly after InSight landed on Mars in November 2018.

The probe, though, ran into problems soon after the hammering process began, when the mole stopped about 30 centimeters into the surface. Scientists first speculated that the probe had run into a rock or harder subsurface layer.

The instrument team later determined that the problem was with a lack of friction between the probe and the surrounding regolith, which caused the mole to rebound as it hammered, holding it in place. At times the mole appeared to partially back out of the hole.

Later efforts involved moving the instrument’s housing on the surface, revealing the mole sticking out of the hole. Spacecraft controllers used the scoop on the end of the lander’s robotic arm to press down on the mole to keep it from rebounding, tamp down regolith around the hole, and also to fill in the widening hole so the mole could gain more friction.

While those efforts were successful in getting the mole completely beneath the surface, and covered by a few centimeters of regolith, additional hammering efforts failed to make any progress, leading to the decision to leave the mole where it is. Project scientists concluded the soil at InSight’s landing site had different properties than that seen by other landers, which was used to guide the design the instrument.

“We are so proud of our team who worked hard to get InSight’s mole deeper into the planet. It was amazing to see them troubleshoot from millions of miles away,” Thomas Zurbuchen, NASA associate administrator for science, said in the statement. “This is why we take risks at NASA — we have to push the limits of technology to learn what works and what doesn’t.”

The decision to stop deploying the mole came less than a week after the agency announced it was extending InSight’s mission through the end of 2022. At the time NASA said that extended mission “may continue deployment (at low priority)” of the mole, but didn’t discuss how long those efforts would continue.

InSight’s other main instrument, a seismometer, continues to work well, measuring Martian quakes. “InSight’s extended mission will focus on producing a long-duration, high quality seismic dataset,” NASA said in its Jan. 8 announcement of the extended mission. With efforts to deploy the mole now over, the spacecraft will use its robotic arm to partially bury the cable between the seismometer and the lander, reducing thermal noise in its data.

InSight also has an instrument that collects weather data, which will continue to operate during the extended mission.

“Fortunately, we’ve learned a lot that will benefit future missions that attempt to dig into the subsurface,” Spohn said.