NASA formally certified SpaceX’s Crew Dragon spacecraft for transporting astronauts to and from the International Space Station, clearing the way for a Nov. 14 launch.
SpaceNews 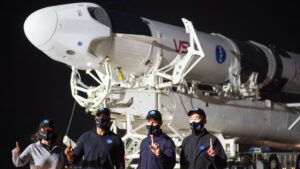 WASHINGTON — NASA formally certified SpaceX’s Crew Dragon spacecraft for transporting astronauts to and from the International Space Station, clearing the way for a Nov. 14 launch.

Agency officials completed the certification of the spacecraft by signing a document known as a Human Rating Certification Plan during a flight readiness review for the Crew-1 mission Nov. 10. That confirmed that SpaceX met all of NASA’s requirements for safely carrying astronauts on the Crew Dragon spacecraft and Falcon 9 launch vehicle.

“It’s just a tremendous day that is a culmination of a ton of work,” said Kathy Lueders, NASA associate administrator for human exploration and operations, at a Nov. 10 briefing about the flight readiness review. Lueders managed the commercial crew program at NASA for several years before being promoted to her current position in June. “It’s NASA saying to SpaceX you have shown us you can deliver a crew transportation capability that meets our requirements.”

NASA officials previously said they planned to finalize the certification, the final milestone of the overall commercial crew development program, at that review. That allowed them to analyze minor changes made after the Demo-2 test flight this summer, such as modifications to its heat shield and a sensor that triggers the release of parachutes during the capsule’s descent.

After years of sometimes contentious relations, both NASA and SpaceX had kind words for each other. “This certification milestone is an incredible achievement from NASA and SpaceX that highlights the progress we can make working together with commercial industry,” NASA Administrator Jim Bridenstine said in an agency statement.

“Thank you to NASA for their continued support of SpaceX and partnership in achieving this goal,” Elon Musk, chief executive of SpaceX, said in the same statement. “I could not be more proud of everyone at SpaceX and all of our suppliers who worked incredibly hard to develop, test and fly the first commercial human spaceflight system in history to be certified by NASA.”

The certification, and completion of the flight readiness review, clears the way for the launch of the Crew-1 mission Nov. 14 at 7:49 p.m. Eastern from the Kennedy Space Center. The launch will send NASA astronauts Mike Hopkins, Vic Glover and Shannon Walker, and JAXA astronaut Soichi Noguchi, to the ISS for a six-month stay.

That launch remains on schedule despite SpaceX making a minor repair to the Falcon 9 rocket. The company said it would swap out a valve on the rocket’s upper stage after a review of testing data. That pushed back a static-fire test of the rocket’s first stage by a day, to Nov. 11.

That repair would take only a couple hours, according to Benji Reed, senior director of human spaceflight programs at SpaceX. “I’m not too worried about needing to delay further. We do have a little bit more time,” he said at the briefing. A successful static-fire test Nov. 11 would allow NASA and SpaceX to perform a “dry dress rehearsal” of launch preparations Nov. 12 as well as a final launch readiness review.

The review also confirmed that SpaceX had addressed a problem with the engines on the Falcon 9 that triggered a last-second abort of an Oct. 2 launch of a GPS 3 satellite. SpaceX later determined that a “masking lacquer” material blocked tiny valves in the engine’s gas generator. SpaceX corrected the problem and successfully launched that GPS 3 satellite Nov. 5.

SpaceX replaced two of the engines on the Falcon 9 first stage for this mission as part of that investigation. “We reviewed all the data on those two new engines. All that data looks good,” said Steve Stich, NASA commercial crew program manager. “So I feel really good about this vehicle.”

NASA and SpaceX highlighted the various firsts for the mission at the briefing, including the first operational commercial crew mission and the first time NASA has flown four people on a capsule. It will also be the first orbital crewed mission licensed by the Federal Aviation Administration’s Office of Commercial Space Transportation. Stich said that the FAA will have responsibility for public safety during launch and reentry.

“It’s very exciting to us get past this milestone and have the agency approve our human rating certification,” Stich said of NASA’s certification of Crew Dragon, noting he’s been involved in the program for 10 years. “Even though we’re certified, I don’t treat this flight any differently than any other flight. We’re going to methodically make sure we’re ready to go launch.”