A NASA astronaut will fly on a Soyuz mission to the International Space Station in April, as the agency confirmed a peculiar arrangement for obtaining a seat on the Russian spacecraft.
SpaceNews 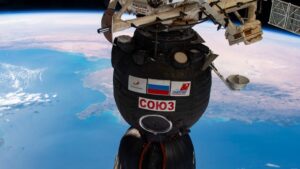 WASHINGTON — A NASA astronaut will fly on a Soyuz mission to the International Space Station in April, as the agency confirmed a peculiar arrangement for obtaining a seat on the Russian spacecraft.

NASA said March 9 that Mark Vande Hei will join the crew of the Soyuz MS-18 mission to the station, launching April 9. He will join Roscosmos cosmonauts Oleg Novitsky and Pyotr Dubrov on the mission, staying on the station for six months.

Vande Hei will be making his second trip to the space station. He was part of the Expedition 53 and 54 crews, spending 168 days on the station from September 2017 through February 2018. He served as the backup to Kate Rubins, the NASA astronaut who flew to the station on Soyuz MS-17 last October, with Novitsky and Dubrov the other backup members of the crew.

The announcement came a month after NASA released a procurement synopsis declaring its intent to obtain a seat on the Soyuz mission, which at the time had an all-Russian crew of Novitsky, Dubrov and Sergei Korsakov. NASA said at the time it wanted the seat to minimize “risks associated with any interruption in U.S. crew member presence on ISS” if there are problems with commercial crew vehicles, and would obtain the seat by “providing similar in-kind services” rather than a direct purchase from Roscosmos.

Roscosmos, in its own statement March 9, said it received an “earnest request” from NASA for the seat. “NASA voiced its request only in the end of 2020 meaning the Russian side had to change the already confirmed and approved launch program,” it stated. “Roscosmos has taken this decision confirming its adherence to the joint agreements and the spirit of joint usage of the International Space Station.”

When NASA published the solicitation in February, NASA did not announce who would take the seat, and NASA officials declined to identify the astronaut in subsequent briefings, citing limitations on providing information during the ongoing procurement. However, Vande Hei was widely rumored to be the astronaut who would be assigned should a deal be reached for the Soyuz seat. Images released last month by Roscosmos showed Novitsky and Dubrov training for the mission, wearing flight suits that had a Soyuz MS-18 mission patch that also included Vandei Hei’s name.

In a separate statement March 9, NASA said it signed a contract with commercial spaceflight company Axiom Space, who will provide NASA with the seat on that upcoming Soyuz flight. NASA will, in turn, give Axiom a seat on a future commercial crew mission to the station, likely in 2023.

“Because the services are determined to be of comparable value to both parties, the contract contains no exchange of funds,” NASA said in the statement.

NASA had not previously disclosed it was working with Axiom Space, but the company, which arranges commercial missions to the ISS and has plans to install private modules there, had been rumored to be the intermediary between NASA and Roscosmos. An Axiom official declined to comment on how the company obtained the Soyuz seat. An industry source familiar with the deal, speaking on background, said the company purchased the seat from Roscosmos in a “purely commercial” arrangement.

NASA’s decision to seek the seat through a third party, and to do so weeks from the launch, has raised eyebrows in the space industry. Even NASA’s approach for announcing the agreement was unusual. The agency sent out a standard press release announcing the assignment of Vande Hei, promoting it on the homepage of its website. The Axiom contract was not mentioned in that release, and instead mentioned in a separate statement posted elsewhere on the NASA website.

NASA’s rush to get a Soyuz seat also attracted attention from some members if Congress. Reps. Frank Lucas (R-Okla.) and Brian Babin (R-Texas), the ranking members of the full House Science Committee and its space subcommittee, respectively, sent a letter to NASA last month asking for details on “NASA’s existing agreements and future plans for accessing the International Space Station.”

The agency has long emphasized its desire for “mixed crews,” with NASA astronauts continuing to fly on Soyuz missions and Roscosmos cosmonauts flying on commercial crew vehicles. Those seats would be bartered between NASA and Roscosmos.

Having a NASA astronaut, or one from Canada, Europe or Japan, on every spacecraft going to the station “protects us from all kinds of contingencies,” Kathy Lueders, NASA associate administrator for human exploration and operations, said at a March 1 briefing about the upcoming SpaceX Crew-2 commercial crew mission, now scheduled for launch April 22.

NASA, though, has yet to complete an agreement with Roscosmos about exchanging seats. “We’re working toward the capability, and moving to have in place, the international agreements where we will be able to fly our crew members up on a Soyuz and have Rocsomos fly their crew members up on one of our two commercial crew providers, and move forward into this new age,” Lueders said. “It gives us the most robust logistics strategy.”