NASA has established a new position of senior climate adviser within the agency, the first sign of a long-expected new emphasis on climate science within the agency under the Biden administration.
SpaceNews 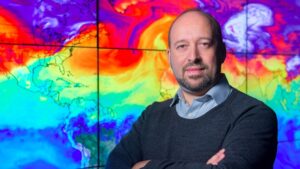 WASHINGTON — NASA has established a new position of senior climate adviser within the agency, the first sign of a long-expected new emphasis on climate science within the agency under the Biden administration.

The position, announced Feb. 3, will be held on an interim basis by Gavin Schmidt, a climate scientist at NASA’s Goddard Institute for Space Studies (GISS) in New York. The agency will make a permanent appointment for the position at an unspecified future date. Schmidt has been director of GISS, a research center that has a major focus on climate studies, since 2014, and has a long career in climate modeling research.

“This position will provide NASA leadership critical insights and recommendations for the agency’s full spectrum of science, technology and infrastructure programs related to climate,” Steve Jurczyk, NASA acting administrator, said in the statement announcing the creation of the position. “This will enable the agency to more effectively align our efforts to help meet the administration’s goals for addressing climate change.”

The adviser will work across the agency on climate-related initiatives, including both research activities in its Earth science division as well as technology projects in the aeronautics directorate designed to reduce carbon dioxide emissions. The position will also involve coordinating with the scientific community both within and outside of NASA, and broader outreach regarding NASA’s work on climate science.

There had been widespread speculation that climate change research would get a higher profile at NASA under the Biden administration. While Biden, both before and after the November election, has not talked about space policy, language in the Democratic Party platform last year called for “strengthening” Earth science activities at both NASA and NOAA “to better understand how climate change is impacting our home planet.”

How that policy might affect NASA programs, particularly in the Earth sciences, isn’t yet clear. “It’s just too early to say whether there’s any changes,” said Thomas Zurbuchen, NASA associate administrator for science, in response to a question during a NASA town hall meeting Jan. 25 about potential changes to the agency’s science portfolio because of the change of administrations.

“These are early days in really understanding the plans and priorities of the incoming administration,” said Karen St. Germain, director of NASA’s Earth science division, at that meeting. She noted that many of the high priority science objectives, or “designated observables,” in the Earth science decadal survey released in early 2018 for future missions have applications to climate science.

“We believe our science is relevant to that, and we’ll see how fit in with additional priorities from the administration,” she said.

Climate change in general is one of the top priorities for the Biden administration, alongside dealing with the pandemic, economic recovery and social justice. President Biden signed a number of executive orders on the issue since taking office Jan. 20, including one to have the United States rejoin the Paris Agreement on climate change.

“The appointment of Gavin Schmidt will help ensure that the Biden administration has the crucial data to implement and track its plan toward the path to achieve net-zero emissions economy-wide by 2050, and a healthier, safer, more prosperous planet for our children,” Bhavya Lal, acting NASA chief of staff, said in the agency statement.

NASA, though, is so far playing only a minor role in the administration’s climate change initiatives. A Jan. 27 executive order on “Tackling the Climate Crisis at Home and Abroad” mentions NASA only once, including it among several other agencies and departments assigned to work with the Defense Department on a “Climate Risk Analysis” to examine the security implications of climate change.

NASA is notably absent from a National Climate Task Force established in the same executive order to “facilitate the organization and deployment of a Government-wide approach to combat the climate crisis.” That task force has more than 20 members, such as the Commerce Department, which includes NOAA, and the Office of Science and Technology Policy.