NASA will delay the launch of a mission designed to test one technique for deflecting a potentially hazardous asteroid, although that delay won’t affect the spacecraft’s arrival at its target.
SpaceNews 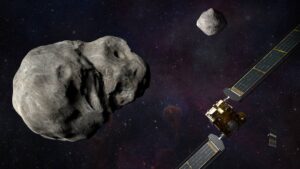 WASHINGTON — NASA will delay the launch of a mission designed to test one technique for deflecting a potentially hazardous asteroid, although that delay won’t affect the spacecraft’s arrival at its target.

NASA announced Feb. 17 that it will postpone the launch of its Double Asteroid Redirection Test (DART) mission from its primary launch window of July 21 to Aug. 24 of this year to a backup window that opens Nov. 24 and runs to Feb. 15, 2022. The spacecraft will launch on a SpaceX Falcon 9 from Vandenberg Air Force Base in California.

In a statement, the agency said issues with two major components of the spacecraft led it to postpone the launch. One involves its main instrument, the Didymos Reconnaissance and Asteroid Camera for Optical-navigation (DRACO), which needs to be reinforced to withstand the launch environment. The other is its solar panels, known as Roll-Out Solar Arrays (ROSA), whose delivery has been delayed by supply chain issues caused in part by the pandemic.

“To ensure DART is poised for mission success, NASA directed the team pursue the earliest possible launch opportunity during the secondary launch window to allow more time for DRACO testing and delivery of ROSA, and provide a safe working environment through the COVID-19 pandemic,” Thomas Zurbuchen, NASA associate administrator for science, said in the statement.

Agency officials had recently hinted at the potential for delays in the mission. “COVID has been a challenge across the board,” Lori Glaze, director of NASA’s planetary science division, said at a Jan. 26 meeting of NASA’s Small Bodies Assessment Group, an advisory committee devoted to studies of asteroids and other small solar system bodies. “DART is looking at some challenges to its schedule.”

She didn’t elaborate on the specific issues, but said at the time “we are still sticking to” the primary launch window.

“We’ve been still working through COVID,” Cristina Thomas, one of the investigation team leads for DART, said in a presentation about the mission later at that meeting. Among the remaining milestones for the mission that she outlined include the delivery of DRACO and ROSA. That would be followed by environmental testing and final reviews before shipment to Vandenberg for launch that she said was planned for August.

DART is the first dedicated mission in NASA’s planetary defense program, which supports efforts to both find potentially hazardous asteroids and study ways to prevent collisions of such objects with the Earth. DART falls in the latter category, as the spacecraft is designed to collide with a small moon, called Dimorphos, orbiting Didymos. That collision will change the orbital period of Dimorphos, which will be measured by telescopes on Earth to determine the effectiveness of the “kinetic impactor” deflection technique.

DART will also carry an Italian-built cubesat called LICIACube that will be deployed to observe the collision and return images of it to Earth. The European Space Agency is planning a follow-on mission, Hera, that will launch in 2024 and arrive at Didymos in 2026 to study the impact site DART created on Dimorphos.

Despite a delayed launch, DART will still arrive at its destination, the near Earth asteroid Didymos, “within a few days” of its original schedule of Sept. 30, 2022, NASA said.