NASA is considering changing the orbit of one of its oldest Mars spacecraft, a move intended to support the Mars 2020 mission after landing but which could affect both its science and support of other missions.
SpaceNews 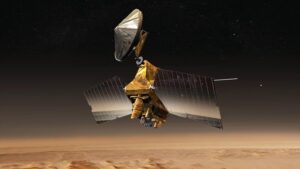 WASHINGTON — NASA is considering changing the orbit of one of its oldest Mars spacecraft, a move intended to support the Mars 2020 mission after landing but which could affect both its science and support of other missions.

NASA launched the Mars Reconnaissance Orbiter (MRO) in 2005 with a suite of six science instruments, including a high-resolution camera. The spacecraft has increasingly been used as a communications relay, supporting spacecraft on the surface of Mars.

At the time, NASA said it would defer a decision until after the landings of the InSight mission in November 2018 and Mars 2020 in February 2021. With Mars 2020 now weeks away from landing, that decision on whether to change MRO’s orbit is coming due.

While the change in orbit is intended to extend MRO’s life, some Mars scientists are concerned it could disrupt science. The different orbit would make it more difficult to compare new observations with earlier ones. It could also affect MRO’s ability to provide support to other missions, such as the Curiosity rover.

“We want to make sure we fully understand the benefits of staying in the current orbit and adjusting the orbit,” Ianson said. “I think people notionally have an idea about that, but I don’t think we’ve fully examined it and had a really in-depth discussion about it.”

Michael Meyer, lead scientist for the Mars Exploration Program, said at the MEPAG meeting that a potential change in the spacecraft’s orbit could have “a few other complications,” such as support for both Curiosity and the European Space Agency’s ExoMars mission, now scheduled for launch in 2022 after it missed its mid-2020 launch window.

“We’re going to revisit it” after the Mars 2020 landing, he said, “and do what the real trades are, and make a decision on what the best thing is to do for overall Mars science.”

The communications infrastructure at Mars is a growing concern for scientists and mission planners. NASA has relied on orbiters launched primarily for science missions to serve as relays, including MRO as well as Mars Odyssey, launched in 2001, and MAVEN, launched in 2013.

Proposals in recent years for new orbiter missions either devoted to communications or with communications as one of their primary roles have made little progress. The most recent concept, presented at meetings in late 2020, called for a network of three satellites with intersatellite links to provide continuous high-bandwidth communications for spacecraft both on the surface and in orbit. Those spacecraft could be developed in some kind of commercial partnership.

That concept is most closely tied to Mars Ice Mapper, a mission still in early development that will fly a radar mapping payload to look for subsurface ice deposits to support future robotic or human missions. That communications network, NASA officials said, would increase the amount of data that mission could return by a factor of 100.

Both Mars Ice Mapper and the proposed communications network will not launch until later in the decade, if approved. Ianson said a decision on changing MRO’s orbit to support Mars 2020 will be made “in the coming months.”